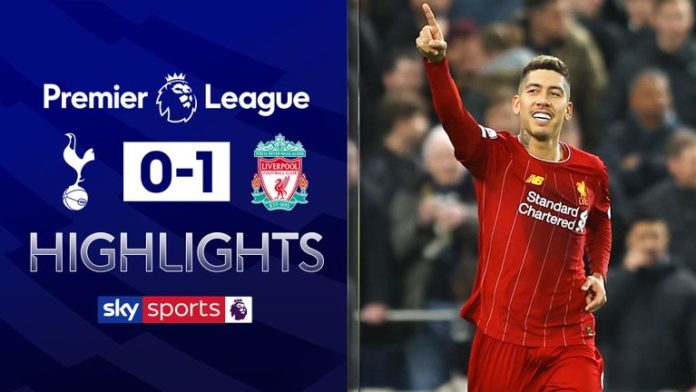 Report and highlights as Liverpool overcame another significant hurdle as they close in on a first league title in 30 years; Victory moves Reds 16 points clear at the top of the Premier League

Liverpool’s march towards the Premier League title continued as they beat Tottenham 1-0 at the Tottenham Hotspur Stadium to set a new European points record.

Roberto Firmino scored the only goal of the game in the 37th minute as Jurgen Klopp’s side, who have now gone 38 league games without defeat, sealed their 20th win of the season to move 16 points clear at the top of the Premier League.

Victory at the Tottenham Hotspur Stadium is another significant hurdle cleared as the Reds go in search of a first league title in 30 years. It also takes Liverpool’s points tally to 61 from 21 matches, which represents the best start to a campaign of any team in the history of Europe’s top five leagues.

Tottenham, who could have snatched a point late on had Heung-Min Son and substitute Giovani Lo Celso not wasted clear-cut opportunities, drop to eighth in the table after a run of one win in their last five league matches.

Spurs’ Premier League debutant, Japhet Tanganga, was given an early test as Liverpool counter-attacked through Firmino. The 20-year-old defender made a crucial block to deny the Brazilian forward, but the rebound fell to Alex Oxlade-Chamberlain, whose shot struck the base of the post.

Man of the match: Roberto Firmino.

With Liverpool dominating possession and pushing forward at every opportunity there were chances for Spurs on the break, but Dele Alli could not trouble Alisson Becker, lashing high over the crossbar after holding off challenges from Virgil van Dijk and Joe Gomez.

Van Dijk was involved at the other end in the 22nd minute, meeting Jordan Henderson’s cross at the far post for a free header, but the Dutchman’s effort was brilliantly kept out by Paulo Gazzaniga to keep the scores level.

Liverpool’s dominance eventually told, and they took the lead in the 37th minute. Henderson kept the attack alive on the edge of Spurs penalty area, teeing up Mohamed Salah. The Egyptian held the ball up in the penalty area before finding Firmino, who let the ball run across his body before producing a powerful finish.

A VAR check for handball against Henderson was required but the goal stood as Klopp’s men quickly went in search of a second. Salah won possession from Davidson Sanchez and quickly raced through on goal before seeing his shot flash inches wide of the near post.

After the break, Liverpool had chances to extend their lead, but Trent Alexander-Arnold dragged wide of the far post before Sadio Mane’s header was kept out by Gazzaniga.

But as the game wore on and Liverpool tired, it was Spurs who were the more threatening of the two sides.

Jose Mourinho handed a maiden Premier League appearance to Japhet Tanganga against champions elect Liverpool. The 20-year-old centre-half has only played in a Carabao Cup game at Colchester but was thrown in against the Reds, with Danny Rose returning from an injury.

Liverpool made one change from their last league outing, with Alex Oxlade-Chamberlain replacing the injured James Milner.

Son missed an excellent opportunity to level in the 74th minute when played through by Lucas Moura, placing his shot well over the crossbar before Lo Celso, picked out by Serge Aurier’s pinpoint cross, somehow managed to place his shot wide of the far post five yards out.

In the end, Firmino’s goal proved enough for Liverpool, who moved to a 38th consecutive game unbeaten – the equivalent of a whole season – across the 2018-19 and 2019-20 Premier League campaigns.

61 – @LFC have won 61 points in the Premier League in 2019-20 – the most any side has ever registered after 21 games in a single season across Europe’s big five leagues (assuming 3pts/win). Imperious. #TOTLIV pic.twitter.com/b9KvNnciEk

Tottenham head coach Jose Mourinho: “(We were) very, very close. I think we have many reasons to be sad with the result but I have only reasons to be happy with what the boys did.

“I think we deserved more from this game. We intensified the pressure a bit more in the second half. We had lots of good chances to score a goal.

“I’m proud of the boys, it was fantastic to compete against such a good team.”

Liverpool boss Jurgen Klopp: “The result is the most important thing. There was one team who deserved to win and that was us. That the game was not decided after 50 or 60 minutes was our fault as well.

“Of course, then it was hectic, very intense. It’s difficult to come here. You can expect a little bit that they defend deep. They are really good at counter-attacking.

“It’s not that I think we can’t do better, the opposite in fact. But if it was easy to win here many more teams would do it. There were a lot of good parts. We should have scored more goals, that’s the truth.”

Man of the match – Roberto Firmino

Firmino’s winner means he has now scored five goals in his last six games for Liverpool in all competitions – as many as he had in his previous 30 appearances for the Reds before this run.

However, it’s not just his goals that are important to Liverpool.

Sky Sports’ Gary Neville said: “Any manager in the world would have Firmino as their centre forward in their team. He’s absolutely incredible. He’s selfless, brilliant, scores goals, sets things up, people link of him and he makes all the right runs. He’s an outstanding player.”

Klopp was also full of praise for his “massively important” goalscorer Firmino, saying: “Bobby Firmino, he plays all the time. That’s probably the best thing I can say about him. This goal was exceptional.”

20 – Tottenham have conceded 20 goals in their 13 games under Jose Mourinho in all competitions, the quickest any of his sides have shipped 20 goals. Indeed, in his first stint in England with Chelsea, it took 44 games for Mourinho’s Blues to concede that many. Leaky. #TOTLIV

Liverpool host rivals Manchester United at 4.30pm on Super Sunday, live on Sky Sports Premier League. Spurs host Middlesbrough in an FA Cup third-round replay on Tuesday at 8.05pm, before travelling to Watford in the Premier League on Saturday at 12.30pm.