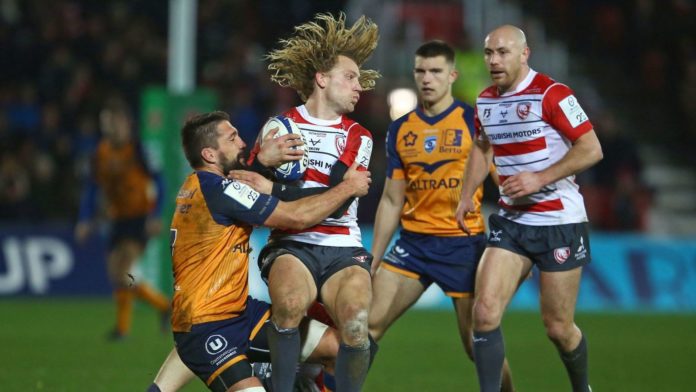 Gloucester kept their hopes of a European Champions Cup quarter-final place alive with a 29-6 victory over Montpellier at Kingsholm.

However, despite the bonus-point success they will probably need to secure at least a win in Toulouse in their final group game next Sunday in order to secure qualification.

This will be a daunting task as the unbeaten French side are already guaranteed top spot in Pool Five and beat Gloucester 25-20 at Kingsholm earlier in the season.

A strong second-half performance disposed of a much-weakened Montpellier, who were already out of the competition so chose not to select any of their France international squad members in their starting line-up.

The hosts began brightly to test the French team’s defence with threatening runs from Rees-Zammit and Jason Woodward but they could not capitalise as they lost two of their first three line-out throws.

After only nine minutes, the hosts suffered a big blow when Danny Cipriani limped off to be replaced by Welsh international, Owen Williams, for only his second appearance of the season.

Against the run on play, Montpellier had the first chance for points and full back Steyn stepped up to kick a penalty from close to halfway to give his side a 3-0 lead at the end of the first quarter.

It was then the visitors’ turn to pick up an injury when South African wing Henri Immelman fell and twisted his knee as he fielded a clearance with no opponent near him.

Gloucester scored the first try after 33 minutes when Montpellier carelessly lost possession from a needless chip ahead and Rees-Zammit was on hand to pick up and race clear before providing Heinz with the scoring pass.

Twelvetrees converted for a 7-3 half-time lead but by then the French’s injury woes had continued as forwards Antoine Guillamon and Julien Bardy were forced to leave the field.

The second half began in thrilling fashion. Ollie Thorley collected the restart and burst through the defence before running 80 metres. He was hauled down but Montpellier conceded a penalty, which Twelvetrees kicked.

Swift passing from their three-quarters then saw Gloucester extend their lead when Rees-Zammit used his pace to find the corner, before the visitors responded with a penalty from Darmon.

Morgan drove over for Gloucester’s third try before being replaced but it mattered little as Montpellier were firmly under the cosh.

Their lock, Paul Willemse, was yellow carded for repeated team infringements and Gleave immediately crashed over to give his team a bonus point and a fighting chance in France next week.