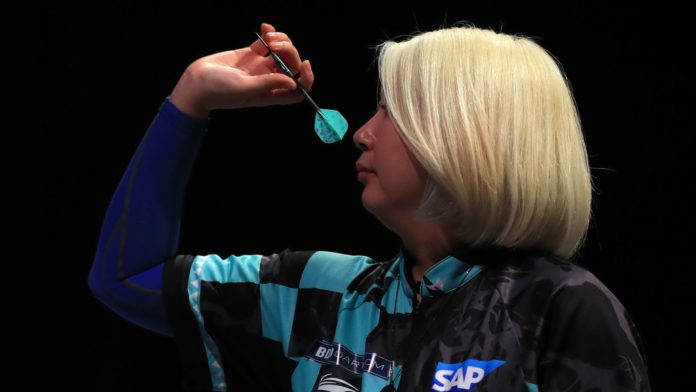 The Japanese star out-gunned the Lancashire Rose in Saturday night’s meeting, winning 3-0. In the deciding leg of the third set, she held her nerve with just one arrow at tops to break throw and seal the title.

Earlier in the day, Keane Barry was crowned the BDO World Youth champion. The 17-year-old Irishman overcame Leighton Bennett, 14, in an entertaining contest between two of the sport’s rising stars.

‘Dynamite’ averaged 90.54 en route to the victory, backing up his JDC and Irish Matchplay titles in recent months.

BDO World Youth Champion 2020?? what a match fair play to @L8tonbennett and thanks to everyone who supported me!!

There will be a new winner of the men’s competition, as Wayne Warren and Jim Williams will face off in the decider.

Mere hours after his epic quarter-final win over Scott Waites, Scott Mitchell returned to the London oche on Saturday afternoon to face Warren. However, the 2015 champ couldn’t back it up, as he fell to the sixth seed 6-3.

Williams and Warren will meet in the showpiece, with the winner set to become Wales’ fourth world champion, after Leighton Rees, Richie Burnett and Mark Webster.