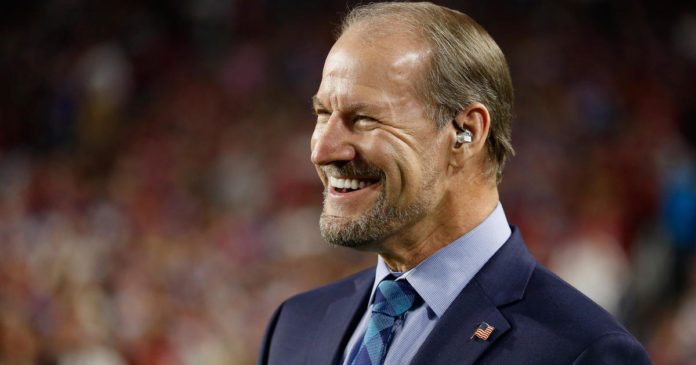 Former Pittsburgh Steelers head coach Bill Cowher on Saturday was announced as the first member of the National Football League’s Hall of Fame Centennial Slate for the class of 2020. Cowher was surprised with the news in the middle of a live pregame broadcast for the AFC divisional playoff game between the Tennessee Titans and the Baltimore Ravens.

Cowher was in the middle of a segment on Ravens quarterback Lamar Jackson during CBS’ pregame show, “The NFL Today,” when he was interrupted by Hall of Fame president David Baker, who was there to deliver the news. Cowher recognized Baker and seemed to know what was coming, as he became emotional before Baker even made the announcement.

“On behalf of all of us who love this game, and the Pro Football Hall of Fame, it is my privilege,” Baker began. He was cut off by Cowher, however, who noted “This isn’t right that this is happening right now.”

Baker played along and pretended to leave, but was pulled back by Cowher, who asked him to continue.

Cowher was then joined by his wife, Veronica Stigeler, and daughter, Meagan, whom he embraced before his on-air colleagues swarmed to congratulate him.

In an impromptu speech, Cowher stated repeatedly that he was blessed, and said he had come to peace some time ago with possibly never making it into the Hall of Fame.

Cowher is a member of a special 15-member centennial class, as the NFL is currently celebrating its 100th season, that was selected by a special committee last week. The other 14 members of that class will be announced on Wednesday, while the standard five members representing the traditional class of 2020 will be selected February 1.

Cowher was head coach of the Steelers from 1992 until 2006. In his second-to-last season, he and the Steelers won Super Bowl XL in February 2006. After stepping away from coaching, Cowher turned to broadcasting, joining CBS’ “The NFL Today” as an analyst in 2007.

CBS News and CBS are both divisions of ViacomCBS