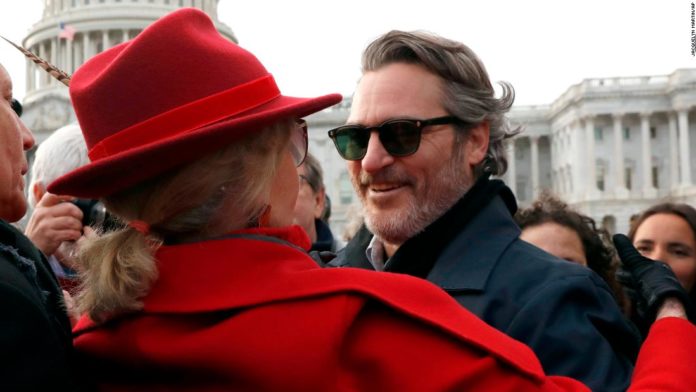 Fire Drill Fridays, the name of Fonda’s weekly initiative, confirmed to CNN that the two actors were arrested this week. The US Capitol Police verified that 147 people were arrested in Friday’s protest, but did not provide a list of names. They were all charged with crowding, obstructing or incommoding, a spokesperson for the department told CNN.
In a speech to fellow protesters, Phoenix called out the meat and dairy industries for their role in the climate crisis, according to the Fire Drill Fridays’ Twitter account.
“Let our country awake,” proclaimed Sheen, in an emotional speech calling for action on climate change.
This is the 14th week of Fonda’s climate crisis protests in DC, which have been attended by everyone from Ted Danson to Iain Armitage.
This week’s protest focused on major banks and investors that finance the expansion of the fossil fuel industry. It’s also the last protest for the time being, as Fonda will be returning to Los Angeles.