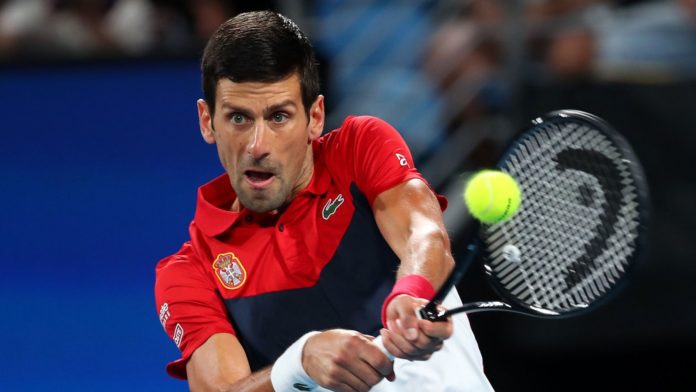 Novak Djokovic beats Rafael Nadal in straight sets 6-2 7-6 (7-4) to send the ATP Cup final between Serbia and Spain to a deciding-doubles match.

From start to finish, Djokovic was mesmeric and thrived under the pressure of knowing that if he lost, Spain would take the inaugural title.

In the opening singles clash of the competition-deciding tie, Roberto Bautista Agut had continued his own electric form to win his sixth consecutive match in Australia.

Bautista Agut had too much for Dusan Lajovic to handle and the 7-5 6-1 result handed Nadal a chance to wrap things up for Spain.

However, Djokovic had other ideas and the competition will now be decided by a winner-takes all doubles match.

Djokovic will partner Viktor Troicki and they will face-off against Pablo Carreno Busta and Feliciano Lopez.

“I have played a lot of tennis in the last couple of days,” Nadal said of the decision not play him in the doubles.

“My team-mates played great yesterday and my energy levels are a little bit lower than usual. It is a team decision and we believe in our team, that’s why we have had success in the past. “

The 55th singles meeting between Djokovic and Nadal saw the Serbian break his opponent in the first game and go on to win his 18th set in a row by 6-2.

With a 19-7 head-to-head record against Nadal on hard courts, Djokovic had been in such a positive position before but also knew to expect significant retaliation from the world No 1.

Nadal started to generate waves of his own as the second set played-out and none more so than the tennis he produced to claw himself back from 15-30 at 5-5 all.

Djokovic’s break point opportunities arrived after he outlasted Nadal in a barn-storming rally but from there, he had to appluad the world No 1’s determination and skill-level.

Nadal cancelled out the first break point through a jaw-dropping forehand volley, one that graced the line, and then unleashed a world-class 145km backhand winner to claw it back to deuce. He roared as he went on to hold.

Every time I get to play Rafa, we get to play a lot of exciting points. There were some incredible exchanges today. I started the match perfectly, everything worked for me and my serve got me out of trouble in the second set. I’m really glad to have held my nerve in the end.

With the crowd making themselves heard at every opportunity, the second set went to an enthralling tie-break.

After sharing the opening eight points, Djokovic unleashed a wicked backhand winner of his own to create a window of opportunity at 5-4.

He forced Nadal into an error on the backhand slice to take the next point. Then, on his own serve secured the first of his two match points for the much-needed 6-2 7-6 (7-4) victory.