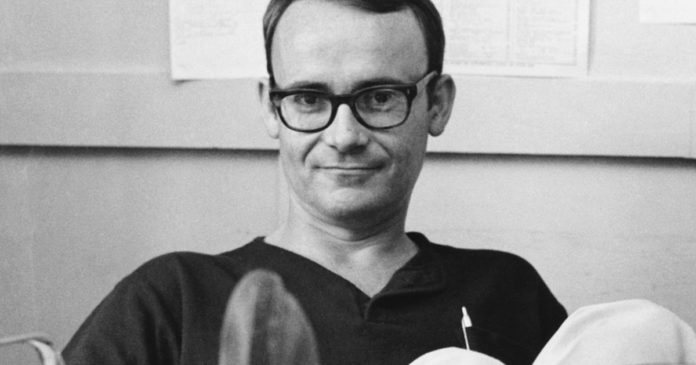 It happened this past week … the death of comic writer and actor Buck Henry.

Henry ruffled feathers, and fur, in 1959 by co-founding the Society for Indecency to Naked Animals. Its mock campaign to clothe the world’s beasts even took in “The CBS Evening News with Walter Cronkite.”

Reporter: “What kind of clothes do you propose to put on all the naked animals of the country?”
Henry (as Clifford Prout): “Simple, decent, and comfortable clothing!”

In 1965, he teamed up with Mel Brooks to create the classic television spy spoof “Get Smart,” with Don Adams as a bumbling secret agent.

Henry went on to write the Oscar-nominated screenplay for the 1967 film “The Graduate,” starring Dustin Hoffman and Anne Bancroft. Henry himself appeared in a cameo as a hotel clerk:

From there, it was on to the early years of “Saturday Night Live,” which he hosted TEN times, and where he served as John Belushi’s mild-mannered foil in a number of “Samurai” sketches.

His screenwriting credits included “Catch-22,” “The Owl and the Pussycat,” “What’s Up, Doc?” and “To Die For.”  He also co-directed, with Warren Beatty, the 1978 fantasy “Heaven Can Wait,” sharing an Oscar nomination for Best Director.

Though his on-screen appearances declined in recent years, Henry set a standard that comics to this day try their best to equal.