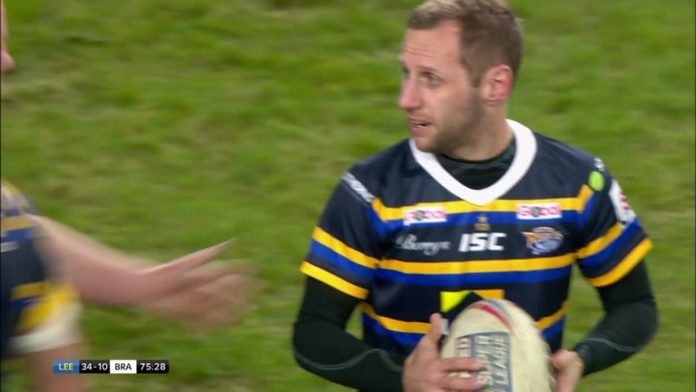 A tearful Rob Burrow entered the fray for one final time as a Leeds Rhinos player on Sunday and was treated to a standing ovation by a sold-out Headingley in their pre-season game against Bradford.

In a game that was originally Jamie Jones-Buchanan’s testimonial match, all eyes were on Burrow in the 76th minute when he stood on the side of the field waiting for his name to be announced.

The reception was loud and heartfelt as Burrow ran onto the field, welcomed by fellow legends and former team-mates including Kevin Sinfield, Danny McGuire and Kylie Leuluai who had agreed to play one last game to help raise money for their old friend who was recently diagnosed with Motor Neuron Disease.

“Someone asked me if I would play, well you can’t not,” Sinfield told Sky Sports shortly before running on. “To be here today, the banter we’ve just had there in the ten minutes getting dressed, it’s like old times.”

The former players, who brought so much silverware to Leeds in a golden era, needed no convincing to get the old band back together.

Jones-Buchanan, who agreed to share his testimonial game with Burrow when the news was announced, said: “It’s been quite emotional.

“I don’t get emotional at things I can’t control, but being able to finish off with [Sinfield] at the side of me, who’s been the most influential player in my career, is wonderful because I didn’t get a chance to do that when he retired and I was injured in 2015.”

Burrow said after the game, when told that Headingley had been sold out for the first time to see him and the other legends: “What can you say to that? I only hope they know I’d do the same for them.

“We’re not the biggest sport, but we’re the most closely-knit.”

The game was won 34-10 by Leeds, but few cared as the fraternity came together for one of the all-time greats of the game.

“What I’ve been overwhelmed with is the love, the support, the friendship that everybody has afforded him,” said former team-mate Barrie McDermott.

“There are people here from Leeds, of course there are, and people here from Bradford. But I’ve seen Wigan fans, Saints fans – people who are not involved and don’t have a team playing today have all come to support the great Rob Burrow.”

A fundraiser has been set up for Rob Burrow and his family, which has raised almost £250,000. Click here if you’d like to donate to the cause.