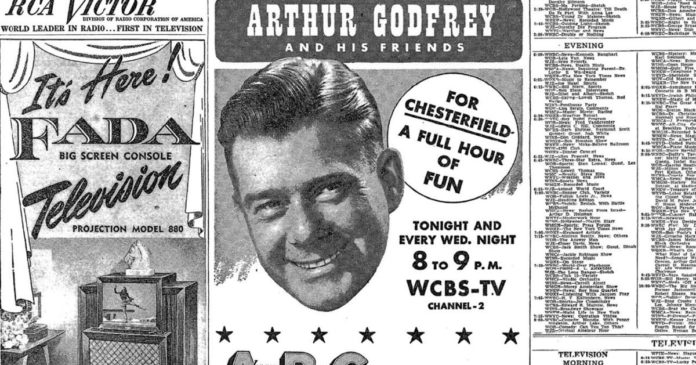 On January 12, 1949, “Arthur Godfrey and His Friends” debuted on the fledgling CBS television network.

Already a familiar voice on CBS Radio, Godfrey had first made the jump to TV the previous year, and by the early 1950s was a CBS mainstay.

With his folksy style and way with the ukelele, Godfrey was riding high, backed up by a team of supporting entertainers, including the popular young singer Julius La Rosa.

But after La Rosa missed a rehearsal, and went so far as to hire his own manager, Godfrey struck back during the radio portion of his morning show, “Arthur Godfrey Time”:

Godfrey: “I would like Julie to sing me that song, ‘Manhattan.'”

La Rosa dutifully sang the song, only to get a big surprise from Godfrey when he was done:

Godfrey: “Thank you so much, Julie, That was Julie’s swan song with us. He goes out now on his own as his own star.”

Though he defended his move by accusing La Rosa of “a lack of humility¸” Godfrey’s warm and friendly reputation was called into question.

In 1959, his ratings in decline, Godfrey left the air for surgery to remove a cancerous lung. He never fully returned.

Arthur Godfrey died of emphysema and pneumonia in 1983 at the age of 79, his prominent place in early television history forever secure.