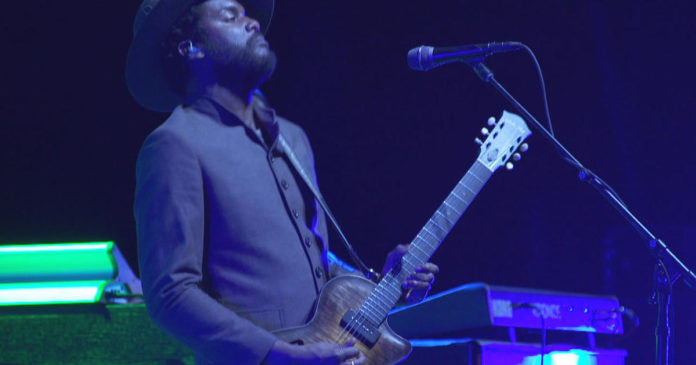 There’s a certain confidence when Gary Clark Jr. takes the stage, and from the first riff, it’s clear why; he wields his guitar like a man possessed.

“I’m not, like, a religious person,” he said. “I quit going to church a long time ago. But, like, music is my religion, I guess you could say. It’s calming, it can hype me up. It’s everything.”

His mastery of the six-string won him a Grammy in 2013, and has earned him four more nominations this year. He’s played the White House, and even toured with The Rolling Stones and Eric Clapton, who said he’d never seen a flow like Clark’s on the guitar since Jimi Hendrix.

This 35-year-old is still allowing comparison like that to “sink in,” as he told us, when he sat down with “Sunday Morning” on his ranch in Texas. “It doesn’t really resonate until I’m at home, and I’m goin’, ‘Wow, this is real,'” he said. “You know what I mean? Like, all those dreams and hopes and aspirations I had as a kid and I thought were silly and I was scared to share with people because they might think that I’m, you know, out of my mind?”

Clark is from Austin, Texas, the son of Gary Clark Sr., a car salesman, and his wife, Sandi, an accountant.  Mom still does his books, and says her son’s life changed forever at the age of 12: “He got the guitar for Christmas, and then, checked out a couple of books, and was just totally self-taught.”

“He was upstairs in his room playing,” his father recalled, “and I told her, ‘Come here. Come here and listen to this!’ We open up the door and there he is, he was hitting [Jimi] note for note.”

Johnson asked, “So, is that the day you realized …?”

The very next year Clark was good enough to play gigs in the city, on school nights no less. “I used to feel guilty having him in nightclubs,” Sandi said. “And I’d look around, why do I have my 13-year-old kid in a bar?”

Why did she?  “Because he wanted to be there.”

Gary himself explained, “I was raised real religious – Baptist, go to church every Sunday. The fear of God was very present in the house, you know what I mean?

Johnson caught up with Clark as he was shooting the music video to his latest single, “Pearl Cadillac.”  The song is about leaving home to go on tour for the first time, and understanding everything his mother had done for him.

For example, his parents put up with him “borrowing” the family car without their permission. That earned him the nickname Hotwire.

“I would steal my parents’ car. I would start that thing up and just go wherever I wanted, from ’til whenever my dad fell asleep watching ‘Star Trek,’ ’til, you know, when they woke up to get everybody ready for school.”

When asked how he measures success, Clark replied, “I got a beautiful family. I’ve got two kids that I’m crazy over. I got amazing, supportive wife who is, like, my backbone. I think that’s success to me.”

His success has also allowed him to buy his own piece of Texas Hill Country. “This is my peaceful zone,” he said. “This is my serenity.”

“My life is so loud and noisy. And I like to hear crickets. At heart, I am kind of a country boy. I like to be around nature, and nothing.”

Clark’s ranch outside of Austin is where he lives with wife, Austrailian model, Nicole Trunfio, and their children, and where he records music when he’s not out touring the country.

It was also this land that gave Clark the material for the title track for his latest album. The song is about a confrontation with a neighbor who couldn’t believe that a black man could own “This Land”:

“You know, I’m 35. I’ve been dealing with this since I was in elementary school. You know what I mean?”

A reality Clark’s parents couldn’t shield him from. As he was growing up, the family had dog feces put into their mailbox, and the N-word written on their fence.

Johnson asked, “And what was the discussion in the household when those things happened?”

“You just can’t let that get to you,” Sandi Clark said. “That’s that other person’s issue. That doesn’t speak to you as a person and what kind of person you are. That’s someone else with the problem.”

“I was born this way and I love it, you know what I mean?” Gary Jr. said. “And so, for somebody to judge me based upon this, and not ask any questions, and not even try and get in here [indicates his mind], it made me upset, it made me sad, it made me curious about the future. Having kids and a family, you know, they tap into your emotions.”

“So it’s not all about you anymore?”

“Yeah, they unlock things that I think I didn’t realize I was holding onto.”

Gary Clark Jr. is considered one of the greatest guitarists in a generation. But don’t tell him that. “I’m not special. I’m just a simple dude, simple dude from Austin, Texas who picked up a guitar and [explosion].”

You can stream Gary Clark Jr.’s album “This Land” by clicking on the embed below (Free Spotify registration required to hear the tracks in full):