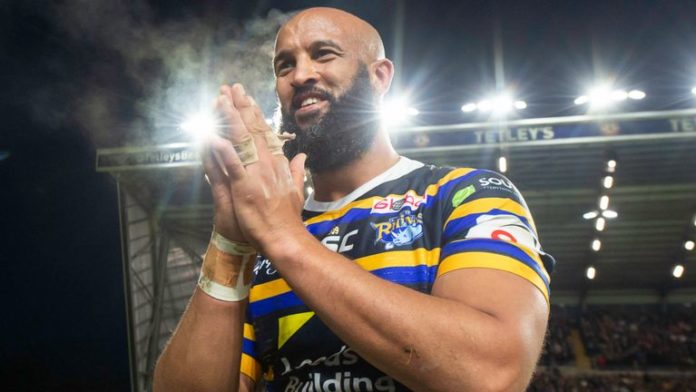 “In times of adversity, when things have been difficult, the boys have never forsaken or left anybody behind,” said JJB of his old team-mates

Jamie Jones-Buchanan says his testimonial game shared with Rob Burrow at Headingley was the “greatest moment” of his career.

Leeds’ pre-season game against Bradford on Sunday was originally going to be all about Jones-Buchanan, but when the news of Burrow’s Motor Neurone Disease diagnosis came to light, he immediately agreed to share it with his former team-mate.

JJB and Burrow took part in the latter stages of the game, as did other members of Leeds’ golden generation, including Kevin Sinfield, Jamie Peacock, Keith Senior and Kylie Leuluai.

Jones-Buchanan said seeing his old team-mates come out in force to support Burrow is what made the day special for him.

“I think it’s probably the greatest moment of my career, I won’t lie, in the way that everybody’s rallied around Rob tonight and come together,” he said.

“A group of boys who have spent 20 years fighting tooth and nail – being dragged to the bottom and to the heights of Grand Final elation.

“It’s all about team spirit. Whatever happens now, in a billion years nobody can ever change what this group has achieved.

“In times of adversity, when things have been difficult, the boys have never forsaken or left anybody behind.

Did nobody tell Kylie Leuluai it was a friendly?! On an emotional day, the big man provided a bit of laughter for his team-mates with a huge tackle!

Click here for all the videos from today at Headingley: https://t.co/Tzkp4fe2gs pic.twitter.com/GCrlwwnGJn

“Credit to the Leeds Rhinos supporters, the Bradford supporters as well; a lot of the charity events that are going on in the background might not get recognised or applauded like tonight’s event has.

“A massive thank you, everybody in rugby league. As tribal as it can be, when it comes to adversity and wrapping round in times of need, it’s phenomenal.

“In terms of symbolically, what my group of players have been about, tonight encapsulates it all. The things that we can control, we will to the best of our ability to support Rob and his family in the future.”

The 38-year-old has retired after 21 season as a Rhinos player but will remain at Headingley as a coach, and said it is important to him to give back to his old club as well as the city of Leeds.

“My life’s always been about people, that’s why I played sport,” he said. “I didn’t realise it until I was older; I thought it was all about winning but winning attracts people, and it’s always about the people for me.

“I’m fortunate to still be on the coal face with the first-team boys now, coaching, and I absolutely love it.

“Leeds is my city, this is where I grew up, this is my home, there’s my family up there in the stands.

“I’ve only ever played for Leeds and my amateur club, Stanningley, and every time I put on this blue and amber jersey – 422 times now – the novelty’s never worn off and it means just as much to me then as it does now.

“Going into the future, God willing, another 20 years representing Leeds, the wider community, and using this fantastic hub to help people fulfil their potential and realise some of their dreams like I have done.”