Home Sport Arteta: Players must step up in Auba absence 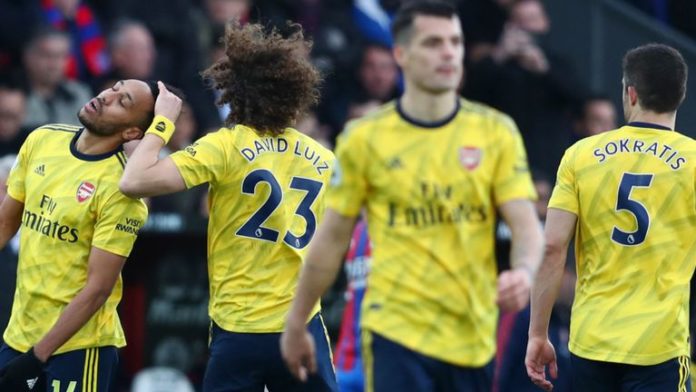 Arsenal head coach Mikel Arteta says his players have to step up and score goals in the absence of suspended captain Pierre-Emerick Aubameyang.

The Gabon international will serve a three-game ban after he was sent off in the 1-1 draw at Crystal Palace on Saturday for a high challenge on Max Meyer, following a VAR review.

Aubameyang, who scored his 14th goal of the Premier League season to give Arsenal the lead at Selhurst Park, will now miss the league games against Sheffield United, Chelsea and the FA Cup trip to Bournemouth.

Asked whether the onus was now on other players to come to the fore, Arteta replied: “They now have to make a step forward now he is not able to contribute to the team with goals.

“Someone else has to do it and I want to see that reaction too.”

Alexandre Lacazette, who has started alongside Aubameyang in all four of Arteta’s league games, is the other leading forward at the club, while Arteta will also look towards Nicolas Pepe, Gabriel Martinelli and Reiss Nelson.

“We have other players that can play in that position. We will try to find a way and be as competitive as possible.”

But Arteta appears in no rush to introduce academy graduate Eddie Nketiah into first-team contention after he was recalled from his loan spell to Leeds earlier this month.

“I think we have to think long term with Eddie,” said the Spaniard of the 20-year-old.

“We have to respect his evolution, his development and we don’t have to make decisions just based on two or three games.”