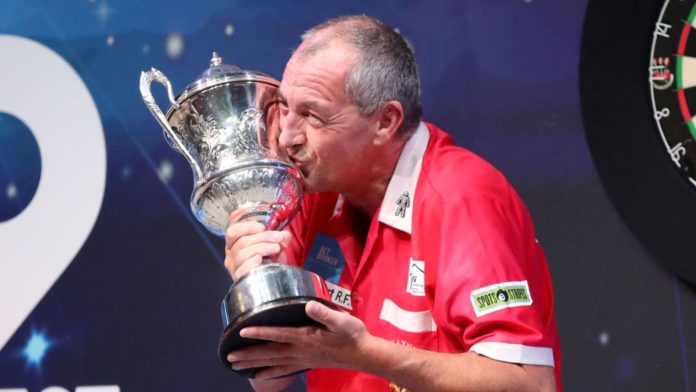 Wayne Warren won an all-Welsh final to become the oldest BDO world champion with a 7-4 victory over Jim Williams at the O2 Arena.

The 57-year-old fifth seed trailed 2-0 to his fellow countryman but grew into the contest and eventually eased to a comfortable victory.

Warren, who also recovered a 2-0 deficit to beat former champion Scott Mitchell in the semi-finals, fought back the tears as he became only the fourth Welshman to lift the trophy.

“I can’t believe it,” he told Eurosport. “This is a dream and now to have as reality. I tried my hardest all week.

“Playing Jim, we’re great mates, and I think Jim will be world champion multiple times. This might be my last chance.”

Williams, the second seed who ended the run of Belgium’s Mario Vandenbogaerde with a 6-4 semi-final victory, made the best possible start by breaking his opponent in the third leg and followed it up with the first of 13 maximums as he took the opening set 3-1.

Warren found a 131 check-out in the second leg of the second set but missed three doubles which allowed his opponent to open up a 2-0 lead.

Warren hit his third maximum in the fifth leg of the third set to reduce the deficit and threw for the fourth set. Williams hit back to level but the veteran showed nerves of steel to win the decider to level the match at 2-2.

Williams led 2-0 in the fifth set but a determined Warren roared back with three consecutive legs to go in front for the first time at 3-2.

Williams stopped the rot by hitting the bull to break in the second game of the sixth set which he went on to win 3-0 to level the match at the break.

Warren looked to benefit most from the break as he edged back in front at 4-3 and had two darts for a 5-3 lead but missed the double eight and Williams stepped in to level at 4-4.

The veteran then crucially hit the bull to break his opponent and open up a 2-0 lead in the ninth set and held his nerve to take it.

Five successive legs then took him to the brink as he eased into a 6-4 lead and never looked like relinquishing his grip.

Williams said: “Obviously I’m gutted but I couldn’t wish for a nicer guy to win it.

“I had a spell towards the end when I lost a bit of focus and you can’t afford to do that against Wayne. He’s been around a long time.

“He was relentless with his scoring so fair play to Wayne.”