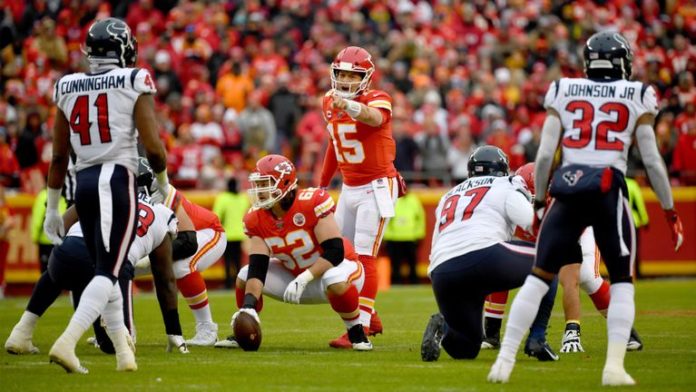 Patrick Mahomes threw five touchdown passes as the Kansas City Chiefs came back from a 24-point deficit to beat the Houston Texans 51-31 and advance to the AFC Championship game.

The Chiefs scored 41 unanswered points and touchdowns on seven straight drives to set up a meeting with the Tennessee Titans at Arrowhead Stadium next Sunday.

Mahomes completed 23 of 35 passes for 321 yards, with three of his five scores going to tight end Travis Kelce, who racked up 134 receiving yards on 10 catches. Damien Williams had two rushing touchdowns and added one through the air.

The Texans started by winning the coin toss, electing to receive, and taking it straight down the field with ease. With Will Fuller back in the lineup after missing out in the victory over the Bills, a fake screen drew defenders to the speedy receiver, allowing Kenny Stills to break free to a 54-yard score.

After a Kelce drop ended the Chiefs’ first drive, Houston stunned the Arrowhead Stadium crowd with a punt block and return touchdown. Barkevious Mingo blocked Dustin Colquitt’s kick, and rookie corner Lonnie Johnson scooped the ball up and took it back 10 yards, leaving the Chiefs in a two-touchdown hole early.

The teams then exchanged punts but on Kansas City’s return, Tyreek Hill let the ball slip through his arms and the Texans were again alert on special teams and able to recover at Kansas City’s six-yard line. When Deshaun Watson found Darren Fells from four yards out to make it 21-0 Houston, there was still a minute remaining in the first quarter.

To start the second, after DeAndre Hopkins and Stills had both helped the Texans reach a fourth and one at Kansas City’s 13-yard line, Houston looked ready to go for it, but Bill O’Brien settled for three points and a 24-0 lead.

Then the Chiefs woke up.

In just three plays and 59 seconds of possession, Kansas City got themselves on the board. Mecole Hardman blazed for a 58-yard kickoff return, Kelce picked up 25 carrying defenders on his back, and Mahomes found Damien Williams out of the backfield for a 17-yard touchdown.

Perhaps trying to make up for his conservative decision to kick on the previous drive, O’Brien chose to run a fake punt on fourth and four from his own 31 but the Chiefs were alert, Daniel Sorensen taking down Justin Reid and giving the Chiefs great field position. Mahomes took advantage by flipping the ball to Travis Kelce from five yards out to make it 24-14 just 23 seconds after the first score.

Then, less than four minutes after their first touchdown, Kansas City had scored again through the same duo. DeAndre Carter was hit hard on the Houston kickoff return, and Sorensen was involved again as he popped the ball out. Darwin Thompson took it down to the six-yard line and Kelce again managed to get open as Mahomes rolled right and hit his big tight end.

After again forcing a punt, the Chiefs had the chance to take the lead before the half, and they completed the comeback with a third straight Mahomes-to-Kelce touchdown. Hill raced for 20 yards, Mahomes scrambled for 21, and Kelce added 20 of his own before last season’s MVP came up with some magic.

Rolling left with no one open, Mahomes flipped the ball away from his body – while dragging his toe to remain behind the line of scrimmage – to Kelce right on the goal line for a five-yard touchdown, and a 28-21 lead.

Ka’imi Fairbairn’s 51-yard field-goal attempt right before the half for Houston sailed wide, and the Chiefs kept their momentum as they started the second.

Sammy Watkins’ 48-yard catch-and-run set up another Kansas City touchdown, and this time it was Damien Williams who powered in from one yard out. Harrison Butker’s missed extra point meant the Chiefs were up 34-21.

Then, after getting the ball, back Kansas City made it 41 straight points with Williams’ second score. Kelce was again involved – picking up 28 yards to start the drive – before two defensive penalties set up Williams to run it in from the five and give Kansas City 41 unanswered points.

Watson kept the Texans alive with an 11-yard dive to the pylon to end the third quarter as he reduced the deficit to 41-28, but the Chiefs converted on their seventh straight touchdown drive when Mahomes threw his fifth touchdown of the day to Blake Bell.

The 75-yard drive only took four plays and 1:32 off the clock as Mahomes found Kelce for 23, Hardman for 28, Watkins for 28 then Bell from eight.

Houston turned the ball over on downs the next time around, and the touchdown drive streak came to an end when Butker kicked a field goal to make it 51-31 with eight minutes remaining, and Kansas City closed the game out with two more fourth-down in the final minutes.