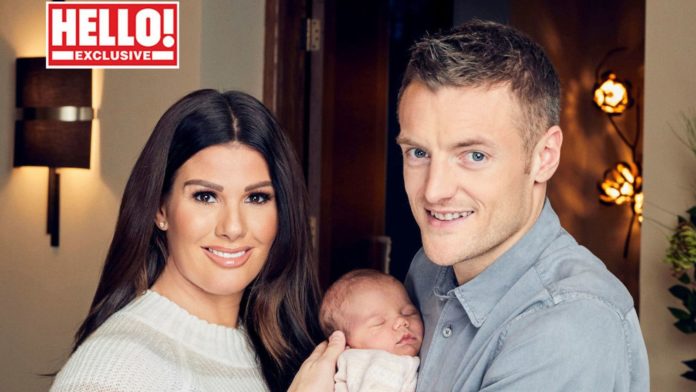 The couple, who married in 2016, welcomed their third child together on 28 December.

The mother-of-five, 37, told Hello! magazine that her footballer husband, 33, was “brilliant” during the birth, as well as “supportive and encouraging”.

She added: “He even tried to crack a joke about the epidural needle to take my mind off it and the painful contractions.

Vardy hit the headlines last year when Coleen Rooney, the wife of footballer Wayne, claimed Vardy’s Instagram account was the source of leaked stories about her private life.

It caused a media sensation around the world, with the hashtag #WagathaChristie trending.

Vardy, who starred on I’m A Celebrity… Get Me Out Of Here! in 2017, denied any wrongdoing and claimed she was “so upset” over the scandal and was struggling to deal with the stress of it while pregnant.

She added: “I’m disgusted that I’m even having to deny this. You should have called me the first time this happened.”

Vardy also revealed to Hello! that she had suffered anxiety and stress at the thought the baby might arrive on Christmas Day, while Jamie was training with Leicester City.

She said: “I’d been very ill with anxiety and stress and was panicking that she might be born on Christmas Day, while Jamie was training and I was on my own with the kids.

“The last thing I wanted was to miss Christmas Day with our children.”

She was admitted to Leicester General Hospital on 27 December and experienced a 16-hour labour.

Vardy, who has appeared on ITV’s Loose Women, also has two children from previous relationships and her husband has a daughter.

They said their children helped pick the new baby’s name.

Jamie told the magazine: “Although Becky tells me I’m a typical man and don’t show much emotion, deep inside I’m over the moon with my kids. I love having a big family. It’s matured me and kept me grounded.”