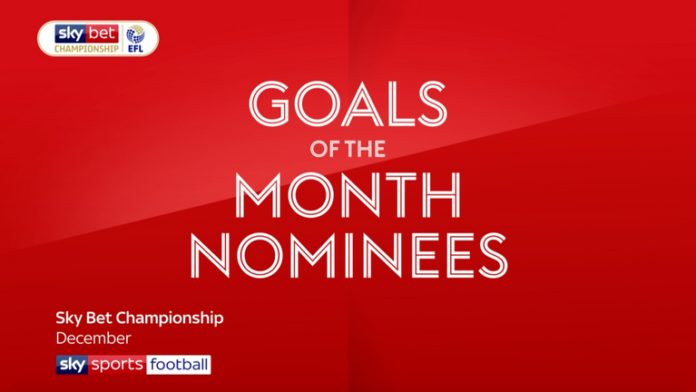 Watch the December entries for the Sky Bet Championship, League One and League Two Goal of the Month and vote for your favourite here…

At first glance, this was a simple lob over two defenders, yet that would be to dismiss the impeccable technique and speed of Tomlin’s thought to conjure up something so magical.

Cardiff goalkeeper Neil Etheridge knew what was coming from Wallace, but such knowledge is all in vain when a free-kick is struck so crisply with swerve, dip and pace into the top corner.

As the ball dropped over his right shoulder, a quick glance at goal was all Fletcher needed to send an instant, sumptuous looping strike up and over Sam Johnstone from 30 yards.

After a game of ricochet in which Blackpool couldn’t go through the home defence, Virtue decided to go over it, arcing a delightfully flighted lob over everyone and into the top corner.

Baptiste was determined the ball wouldn’t leave his right foot as he set off on a mazy slalom before powering home a shot that was still rising as it struck the back of the Lincoln net.

All overhead kicks are acrobatic, but Vassell’s almost defied the laws of physics, so quickly did he spin his body upside down to time a perfect volley following lovely chest control.

Eisa’s balance was extraordinary as he collected the ball on the halfway line and rode two awkward challenges before lacing a searing shot across his body for an exquisite solo goal.

So true was Maguire-Drew’s strike of his free-kick as the ball flew up and over the yellow wall before dipping into the top corner, it didn’t matter that it had travelled over 30 yards.

Collecting the ball midway into the Crewe half, Towell took a sweet first touch to set the ball perfectly in front of him and timed his second so well that his shot arrowed into the corner.