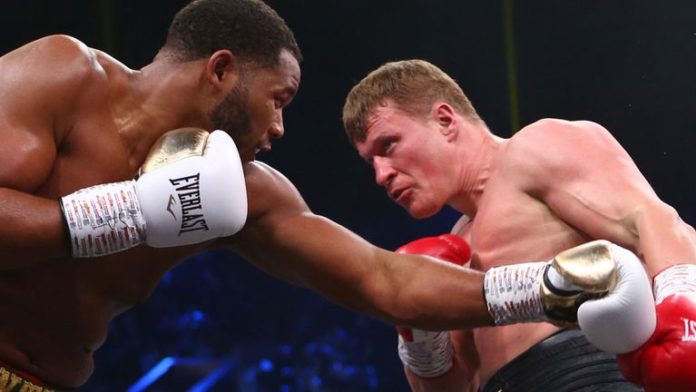 David Price sits on top of a list of British heavyweights targeted by Michael Hunter.

American contender Hunter fought to a draw against Alexander Povetkin in his previous outing but now plans to make an impact by downing a Brit on their own turf.

Price, Hughie Fury and Dillian Whyte are on the wish-list for ‘The Bounty Hunter’, Sky Sports have been told.

ARE HEAVYWEIGHTS GETTING SMALLER?@MichaelHunterII on the benefits of being light and nimble… and why it is becoming a trend…

Hunter, whose only career loss came as a cruiserweight against Oleksandr Usyk, is ranked in the top 12 by all four governing bodies but the world championships are tied up with Deontay Wilder’s rematch against Tyson Fury and Anthony Joshua’s pending decision of who to face next.

Hughie Fury, who lost to Povetkin last year, wants to return to the ring as soon as possible according to his father and trainer Peter.

“I would love the rematch with Povetkin. I know he had a draw with Hunter,” Peter Fury said. “I don’t know where he stands, but if [promoter Eddie Hearn] could make that fight, Hughie would jump straight back into that. He’s a different fighter today.

“Whatever the team put in front of us, Hughie will fight. It’s not really my decision. I’m happy to box any level of opponents. Let’s just see what we get next year.”

Hunter previously revealed about Tyson Fury: “If I could choose to fight any of the top guys, it would be Fury. I’ve already been in the ring with him as an amateur.

“I had to fight him, and I fought very well. He was out on his feet but [the judges] gave him the victory. But I definitely did a lot more damage.

“We were supposed to fight again but he supposedly got injured!

“I would have to fight him but I would absolutely be comfortable doing it.

“I’ve got his number. I would stop him.”