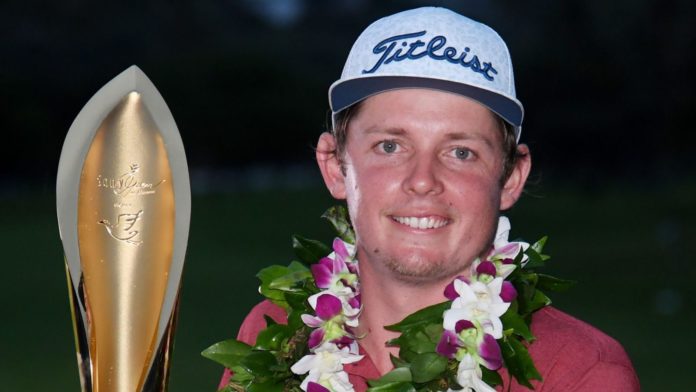 Cameron Smith registered his second PGA Tour title with a dramatic play-off victory at the Sony Open in Hawaii.

Smith birdied the last to close out a two-under 68 at Waialae Country Club and join overnight leader Brendan Steele on 11 under, before beating the American on the first extra hole.

Webb Simpson ended the week in third spot, with Graeme McDowell two shots off the pace in a share of fourth after moving up the leaderboard on a wet and windy final day with a six-under 64.

Starting the day with a three-shot lead, Steele missed an eight-footer to save par at the second but made a tap-in birdie at the par-five ninth and holed his bunker shot on the 11th to restore his overnight advantage.

Smith closed the gap with a five-foot birdie at the next and moved within one when Steele three-putted the 13th from 40 feet, only for the Australian to drop a shot of his own at the 15th after failing to get up and down from a bunker.

Steele missed a six-foot par putt at the 17th to see his lead cut to one heading to the par-five last, where he hooked his approach on his way to a closing par and Smith made birdie to extend the contest.

The play-off saw Steele hit a wedge over the green from the middle of the fairway and fail to get up and down to save par, allowing Smith to secure victory with a two-putt par from 10 feet.

Simpson missed a 15-footer on the final hole to narrowly miss out on forcing his way into the play-off, while McDowell fired five consecutive birdies on his front nine to help end the week on nine under alongside Kevin Kisner and Ryan Palmer.

“I’m very happy with the week’s work,” McDowell said. “I’m pretty bullish about the way I’m playing. I like the direction I’m moving with a lot of things and nice to have a big weekend and punch a nice position as I head into the rest of the season.”