Home World Tesla is now the most valuable US automaker ever 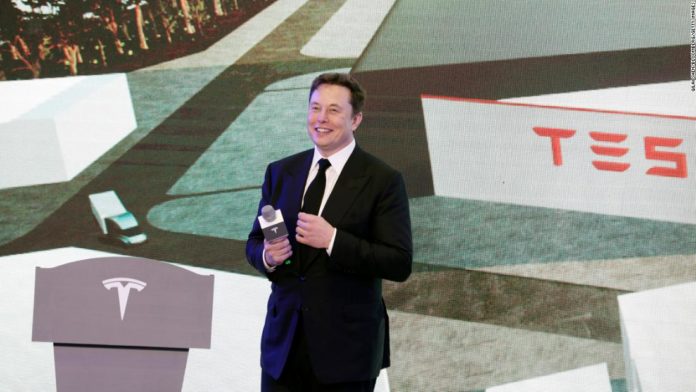 Tesla shares, which are up more than 160% since hitting a 52-week low last June, now have a market value of $86.5 billion. That gives the electric car-maker the distinction of being the most valuable US automaker in history.
This achievement easily tops the previous record high of $76.1 billion for shares of Ford in 1999, according to data from the Center for Research in Security Prices.
The high watermark for GM stock was more recent, when it reached a market value of $67.7 billion in October 2017.
Today both of those stocks have lost a good chunk of their value. GM (GM), valued at $50.7 billion, and Ford (F), worth $36.9 billion, together are worth only about 1% more than Tesla alone.
Italian-American automaker Fiat Chrysler (FCAU) is a distant fourth, with a market value of €19.9 billion, or $22 billion.
Of course, Tesla is no Apple (AAPL), whose market value of $1.4 trillion makes it the most valuable US company in history. But its valuation is remarkable given that Tesla is fraction the size of the more established automakers.
The company sold a total of 367,500 cars worldwide in 2019, while GM’s sales in the United States alone came to 2.9 million vehicles, along with another 3 million in China. Ford had US sales of 2.4 million while Fiat Chrysler US sales came to 2.2 million.
Tesla also is growing much faster than other carmakers. Its sales increased by 50% in 2019, and that growth and investors’ hopes for its future performance has lifted its shares well past many of its competitors.
Tesla shares rose in the last seven months after it reported better-than-expected sales and profits and started production at a plant in Shanghai sooner than many expected. The stock’s run-up was a disaster for investors who shorted the shares, who lost more than $7 billion betting on a decline in value.
GM, which was hit by a 40-day strike that cost it nearly $3 billion, has seen its shares rise only 5% in that same period. Ford, had shares fall by 2%, while Fiat Chrysler shares are up 13%.
The past values for Ford and GM shares would be higher if adjusted for inflation, of course. The 1999 pinnacle for Ford shares would be worth $117.8 billion in today’s dollars. And GM’s top valuation, reached in 2017, wouldn’t be much greater although its shares did reach $61.3 billion in 1999, worth $94.8 billion today.
Chrysler was never worth more than today’s Tesla, but in 2007 just before the combined Daimler Chrysler split up, it had a valuation of $109.5 billion. Daimler Chrysler later sold off Chrysler.
Tesla still has ground to cover if it wants to become the most valuable automaker in the world.
Toyota (TM) has a market value of 25 trillion yen, or about $228 billion. Volkswagen (VLKAF) has a market cap of €90.3 billion, or $100.4 billion. But Tesla is more valuable than many other major global automakers, including Honda (HMC), Nissan (NSANF), Hyundai, BMW and Daimler (DDAIF).