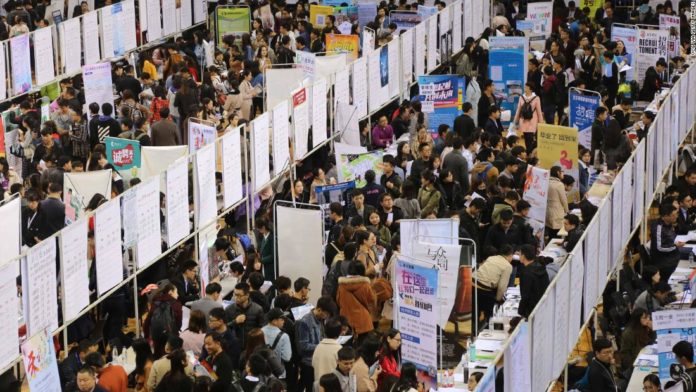 Beijing has made clear that the world’s second largest economy cannot spiral into a slump and risk mass layoffs as it tangles with rising debt, cooling domestic demand and an ongoing trade war with the United States.
That’s particularly important this year because it marks the conclusion of the government’s 13th Five-Year Plan, during which it promised to establish a “moderately prosperous society” and end poverty. Senior members of the Communist Party’s Politburo — the seven most powerful men in China — said last week that all efforts must be taken to achieve those goals in 2020.
In recent weeks, the government has bombarded the economy with a wave of stimulus measures, from tariff reductions that could help soothe the pain from rising prices, to rate cuts that could fuel more bank lending.
Authorities are also amping up the language they’re using to describe the situation. China’s State Council last month called on local governments to “go to all lengths” to prevent massive job losses this year — what it characterized as the country’s top policy priority.
The chief administrative office even warned that the country could face “massive unexpected incidents” if unemployment balloons — a euphemism in China widely understood to refer to social unrest and riots, and one that is rare in public government documents. In recent years, the government has said it has to create 11 million new jobs annually to keep employment on track.
While China’s official unemployment data has barely budged over the last several years, hovering between 4% and 5%, Beijing’s messaging suggests that it is unusually worried about the slowing economy and the challenges that the year could bring.
“Beijing is much more worried about social unrest than about ballooning local debt, which at one point seemed to be a priority, ” said David Zweig, director of Transnational China Consulting Limited and a professor emeritus at the Hong Kong University of Science and Technology.
Huge protests, after all, have for months consumed Hong Kong, which local officials said last November would sink into its first annual recession in a decade. The protests have focused on calls for greater democracy, but economic factors such as the soaring cost of housing and an increasingly competitive labor market have been fueling a growing sense of dissatisfaction, particularly among the city’s young people.
Social unrest might be the “black swan” risk facing the country, Zweig added, using a phrase that Chinese President Xi Jinping himself uttered last year to describe an improbable but chaotic event.
“2020 is going to be very difficult, and mass unemployment may be the most feared problem,” said Frank Ching, a China political commentator and adjunct associate professor at the Hong Kong University of Science and Technology. “It’s not just an economic issue — it could develop into a political one. “
Mass unemployment — brought on by a severe economic slowdown and the failure of businesses in China — could cause rising social tensions and generate greater unrest, shaking the legitimacy of the Chinese regime, he added.
Major political and business figures in China have expressed concern about the economy, too. Late last month, Commerce Minister Zhong Shan told people to tighten their belts and prepare for a tough year ahead.
“Use every penny on vital things,” he told dozens of top commerce officials at a policy meeting.
Alibaba (BABA) founder Jack Ma also recently acknowledged the difficult business climate in 2019, telling entrepreneurs in Shanghai last month that “we also have to know that it might just be the beginning.”

China is expected to disclose its full year growth figures for 2019 on Friday. The most recent data available showed that GDP growth in the third quarter slowed to its weakest pace since 1992.
The 6% growth was still within the government’s target range of 6% to 6.5% for the year. But the slowdown is far from over, according to Gao Shanwen, chief economist for Shenzhen-based research firm Essence Securities.
While Gao expects China’s economy to keep growing, he predicts that annual GDP growth for the next decade won’t exceed 5% on average. In a recent research note, he suggested that the country would have to work very hard to maintain a growth rate above even 4% — at least two percentage points lower than what Beijing is expected to set as a goal for this year during its annual meeting in March.
The US-China trade war is responsible for a lot of the country’s economic struggles, but it’s only part of the story.
Debt has soared in the past decade to extremely high levels, as the government and state-owned companies began borrowing heavily after the 2008 global financial crisis to fund houses and infrastructure projects.
The buying power of Chinese consumers has also taken a hit as housing and pork prices rise, which could dampen spending on cars, luxury goods and high-end smartphones.
Making matters worse: China’s once-vibrant private sector is struggling. The government clamped down on unregulated lending between 2017 and early 2019 during a campaign aimed at defusing rising debt risks. But that made it harder for private companies to borrow money. And the private sector traditionally hasn’t been able to rely on substantial government support.
Banks are lending more money to state-owned enterprises in recent years, which Gao attributed to the pressure Beijing faces to maintain social order as the economy slows. It’s not that the state sector is more efficient — Gao said it’s actually the opposite — but that it can help stabilize employment.
“In the short term, the pace of slowdown has eased,” Gao wrote in his research note. “But in the longer run, the economy is less and less efficient.”

China’s focus on the economy has been obvious, particularly in recent weeks.
Some of the government’s most critical actions: It has pumped tens of billions of dollars into the banking system; announced plans to build more railways and airports; lowered import tariffs across the board for hundreds of products; and promised to open up several industries to foreign investment.
Just earlier this month, the People’s Bank of China tried to stimulate the economy by reducing the amount of cash banks have to keep in reserve, potentially freeing up roughly $115 billion for long-term lending.
China hasn’t been ignoring the private sector, either. Premier Li Keqiang recently said the government is studying how it can offer more funding support to small and micro-sized firms. That could include requiring the People’s Bank of China to cut rates for commercial lenders. Li has also called on Chinese banks to give smaller firms more money.
Fiscal stimulus is also in the works. The country’s transportation ministry recently outlined plans to spend nearly $400 billion on railway, highway and waterway infrastructure.
The country also plans to further open its economy to foreign investment, which could help provide more funding for China’s growth and fuel innovation, according to the commerce ministry. Last April, for example, the government said it would allow foreign companies that make commercial vehicles to control or own their Chinese joint ventures starting 2020.
Other industries are opening up, too.
Earlier this month, China’s financial regulator unveiled new rules to increase the amount of access foreign banks have to the market. The rules will allow them to open branches and to fully own banks in China.
And around the same time, the government started allowing foreign companies to fully own subsidiaries in the life insurance sector that operate in mainland China. Similar caps on fund management or securities firms will be lifted later this year.
The government has also taken more direct action to stem the risk of unemployment. It recently made it easier for people to move from rural areas to most Chinese cities in search of work by relaxing a mandatory household registration system. That could accelerate urbanization in those cities and stabilize China’s property market, according to analysts from research firm Huaxi Securities.