Home World A royal showdown looms over Harry and Meghan’s decision to go it... 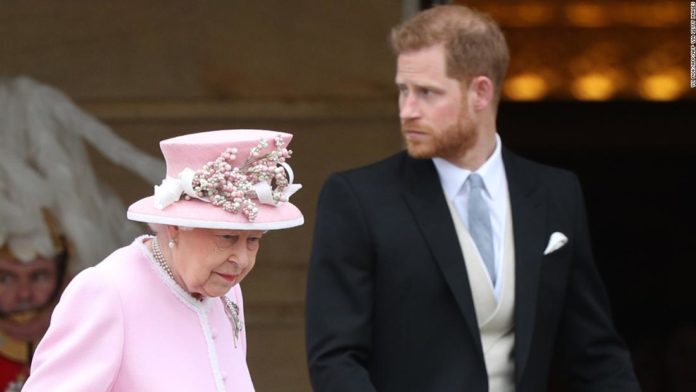 If you undermine “the boss,” you undermine the institution and that’s exactly what Prince Harry did when he announced that he and his wife, the Duchess of Sussex, were scaling back their official duties to pursue their private interests.
It wasn’t so much the decision itself but the timing that left senior members of the family feeling hurt. The 93-year-old sovereign had expressly asked Harry to hold off releasing any statements regarding the couple’s future, CNN understands. The mood in the palace on Wednesday night was one of deep disappointment.
Prince William has expressed his “sadness” over the rift with his brother Harry and that the royal family was no longer “a team,” the UK’s Sunday Times reported, citing a friend.
Inside the Royal family

“I’ve put my arm around my brother all our lives and I can’t do that any more; we’re separate entities,” the Duke of Cambridge told a friend, according to the paper.
Clearly conversations over the Sussexes’ future were already underway internally and the monarch wanted to give royal households time to reach some sort of resolution.
Instead, her grandson blindsided the family by taking the somewhat nuclear option of going public which ultimately, CNN has been told, left the Queen “upset.” That’s a red line at every level of British society and has, unsurprisingly, gone down like a lead balloon in the British tabloid media.
The royal family will hold a summit Monday to discuss the Sussexes’ future, a palace source told CNN on Saturday. Queen Elizabeth II, Prince Charles, Prince William and Prince Harry will all attend the meeting at Sandringham, the Queen’s country estate in rural Norfolk, about 100 miles north of London. Meghan, who has returned to Canada, is expected to call in. It’s unclear when she will return to the UK. The summit will be the first time the senior royals have met since the Sussexes made their announcement on Wednesday.
In spite of how it all unfolded, the decision to step back from senior royal duties is not that surprising. While it may have seemed like something of a bombshell to casual observers, the writing had been on the wall for sometime.
Harry and Meghan had just returned from a six-week break from royal duties over Christmas and both have previously spoken of the toll public scrutiny had taken on them. Harry had also remarked during the couple’s controversial TV documentary that aired in October, about the possibility of living abroad in South Africa.
Additionally, a source close to the Duke and Duchess of Sussex told CNN after the broadcast that the institution around the royal family undervalues the couple. Taken together, it’s clear the couple have been unhappy with their roles for some time.
The royal family’s advisers have, in recent years, been promoting a slimmed-down monarchy, which has seen senior family members like Prince Charles and the Duchess of Cornwall as well as Prince William and the Duchess of Cambridge take on more duties in support of the Queen. In time, that core group will also feature increased appearances by William and Kate’s children, Princes George and Louis and Princess Charlotte.
Harry — and Meghan upon marrying into the family — had been among those senior royals diligently conducting engagements on behalf of the monarch. But as the family expanded and the duke slipped down the line of succession, there had been much speculation over how the Sussexes would define themselves in the royal family of the future.
What we shouldn’t do is confuse the current family crisis with an institutional one because the monarch and her direct heirs have come together in a sign of strength to work towards a response. That is the line of succession which the monarchy is built and, if anything, their actions have proved the resilience of this ancient institution.
Initially, the Queen, Charles and William instructed their teams to find a “workable solution” with the Sussexes within days, a royal source told CNN. The implication here that the couple’s plan, as published for the world to see on a new website, isn’t practical.
CNN was told privately that ultimately, the website needed to be edited significantly or taken down altogether because of the many inaccuracies and false assumptions presented on it.
On Saturday night as news of the extraordinary Sandringham summit emerged, a palace source also told CNN there had been a series of meetings and consultations across the last few days. The source said there were a range of possibilities for the family to review, taking into account what the Sussexes had outlined on their website earlier in the week.
Any change in the working life and role of a royal requires complex and thoughtful discussion. It still remains the wish of the Queen that this happens at pace, the source added. But there is also a genuine agreement and understanding that any decision will take time to be implemented.
One aspect of Harry and Meghan’s new role that they have put forward is working towards financial independence, meaning they won’t accept funding from the Sovereign Grant, an income from the UK government given to the Queen to carry out public duties.
“During the course of 2020, The Duke and Duchess of Sussex have made the choice to step back as senior members of the Royal Family and no longer receive funding through the Sovereign Grant, thereby making them members of the Royal Family with financial independence,” according to their new SussexRoyal website.
However, as their website also notes, only 5% of their income comes from the Sovereign Grant. The rest — which they want to keep — is allocated at the discretion of Harry’s father, Charles through his estate known as the Duchy of Cornwall.
The couple’s website also notes that under their new plan they hope to retain their home, Frogmore Cottage, in Windsor, as a base in the UK — but they’ll need permission from the Queen as it belongs to her.
Then there’s the towering security costs covered by the British taxpayer. These are some of the complex matters that the royal staff will try to thrash out in the coming days.
Their income, properties, security and even titles could become part of the negotiation process palace officials use to get to that “workable solution” that the Sussexes might also be happy with. But Harry and Meghan aren’t known for compromising so what if they refuse to retract their announcement and update the website?
There would be an impasse and the Queen could be left with a fait accompli: Go with Harry’s plan and against her heirs or ask him to step back from public duties altogether in favor of her successors. Whenever she’s been tested like this, she’s always put duty first. That’s why she’s so revered.