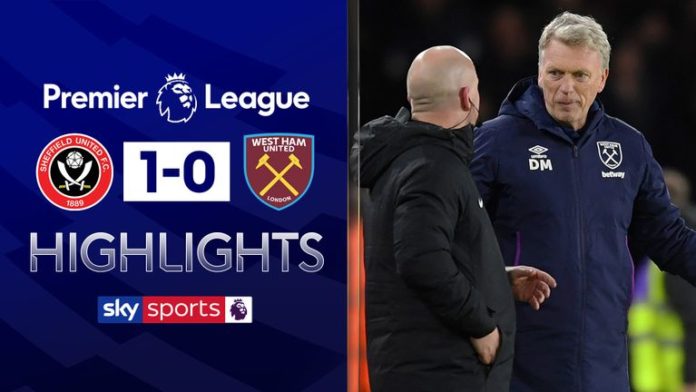 There is no wriggle room on the current handball rule after West Ham’s disallowed equaliser, Dermot Gallagher has said in the latest Ref Watch.

The incident at Bramall Lane on Friday Night Football was one of the big talking points of the weekend, with incidents from Arsenal’s draw at Crystal Palace and Liverpool’s win against Tottenham also analysed.

INCIDENT: In the final minutes of the game, Declan Rice set up Robert Snodgrass to score an equaliser for West Ham, However, VAR reviewed the goal and ruled it out for a handball against Rice, despite it being caused by a John Egan header from close range.

DERMOT SAYS: “Absolutely [decision is correct by the laws of the game]… It strikes his arm and unfortunately, it’s been disallowed.

“With the Willy Boly incident [handball against Manchester City last season], it was the one everyone said showed that we couldn’t go on like we were and the law had to be changed. It was changed because of that and now everyone is saying it’s not what they wanted – you have to be careful what you wish for.

“IFAB meet on February 29 and they would have seen all of these – it’s not just in England, it happens all around the world. They may sit down and say they need to revisit this… They could say it needs to directly go in off the arm, I really don’t know, but at the moment, it’s a futile exercise debating it because they are so black and white.”

INCIDENT: Pierre-Emerick Aubameyang was initially shown a yellow card for a horrendous tackle on Max Meyer. However, VAR intervened and upgraded the booking to a straight red card.

DERMOT SAYS: “It may have happened ‘eventually’, but for all of your arguments about VAR for the Rice handball, it has been used 100 per cent correctly here. This is a really bad tackle that, because of where the referee was on the field, he didn’t see that. He saw the Aubameyang in between him [and Meyer], but that is a red card, there is no doubt about that.”

INCIDENT: There was a similar tackle from Andrew Robertson on Japhet Tanganga, with the Liverpool wing back catching the Tottenham 20-year-old on the ankles with a challenge. However, Robertson was not booked.

DERMOT SAYS: “It’s not the same tackle [as Aubameyang’s], and I think this is a yellow card tackle. Robertson’s first touch is not good, it runs away, and he goes in, gets the ball and continues through. I think he catches him on the side of the boot, he gets there, has nowhere else to go and his boot comes sideways on. The point of contact is nowhere near the Aubameyang tackle.”

INCIDENT: Just before Liverpool’s goal, there was a discrepancy over a throw-in, with the ball appearing to hit both Serge Aurier and Sadio Mane right on the touchline. It was awarded to Liverpool by the linesman, who went on to score from the throw-in, with questions over a handball against Jordan Henderson in the build-up. However, it was judged that the ball had not been handled by the Liverpool captain and Roberto Firmino’s goal stood.

DERMOT’S VERDICT: Throw-in down to the linesman, goal correct to be given

DERMOT SAYS: “The linesman has the best view of the throw-in. He looks down the line and he was pretty sure that if it struck the Liverpool player, he was over the line. We can look at it all day long and not judge, so you have to go with him.

“I think VAR is absolutely correct here because Jordan Henderson heads it and it actually strikes Dele Alli’s arm. It wouldn’t have been a penalty because it struck his arm so close, but it definitely didn’t strike Henderson. It was quite rightly given.”

INCIDENT: Southampton were awarded a penalty when Caglar Soyuncu bought down Shane Long as he burst into the area. Soyuncu was booked but VAR reviewed the decision and overturned it after Long was caught offside in the build-up. The Leicester defender also had his yellow card rescinded.

DERMOT SAYS: “This was a really tough call because Long goes through and it is a penalty and a foul, but it’s a genuine attempt to play the ball so it’s a yellow card and not a red card. But they look at the VAR for an offence in the build-up and it’s incredibly tight. But as we know from before, offside is a yes or no question, and Long is offside so the referee comes back and the yellow card is rescinded.”