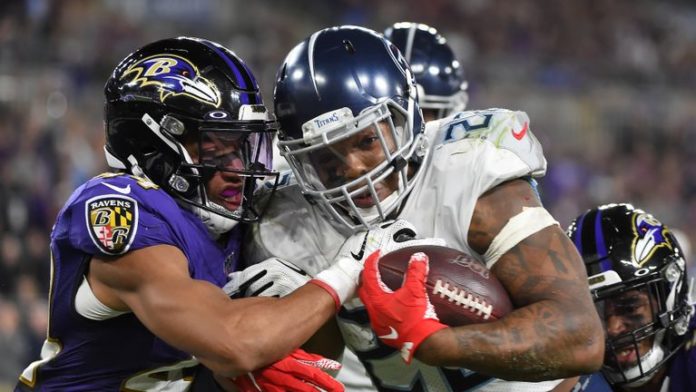 Watch both games on Sky Sports Action (407) as coverage begins at 7pm on Sunday; Titans at Chiefs kicks off at 8.05pm while Packers at 49ers is at 11.40pm

The Super Bowl LIV participants will be decided this weekend!

In the Divisional Round, three of the four home games came out on top, which the lone exception being Tennessee’s stunning road win in Baltimore.

This week, the Conference Championship games will give us the two teams heading to the Super Bowl in Miami in the NFL’s 100th season…

Both games will take place on Sunday and you can join us from 7pm on Sky Sports Action for all the build-up.

First up, at 8.05pm, No 2 AFC Seed Kansas City Chiefs (13-4) will host their second straight AFC Championship game as they welcome the surprise No 6 Tennessee Titans (11-7).

In knocking out the No 3 Patriots and No 1 Ravens in back-to-back road wins, Mike Vrabel’s Titans have looked like a well-rounded team capable of winning a championship, and they head back to Arrowhead Stadium, where they out-lasted the Chiefs 35-32 in Week 10 on Patrick Mahomes’ comeback from a dislocated kneecap.

Kansas City will be hugely confident coming off an outrageous comeback against the Texans, having scored 41 straight points to fight back from a 24-point deficit. Will they reach their first Super Bowl since winning it in 1969?

When these two teams met in Week 12, the Niners were dominant on both sides of the ball, obliterating the Packers on the way to a 37-8 victory. However, since then, the Packers have not lost and have only allowed an average of 15.7 points per game.

Aaron Rodgers is the only quarterback remaining to have reached a Super Bowl before – his Packers hoisted the Lombardi Trophy in 2011. Will his experience pay off or will Kyle Shanahan’s side shut him down again?

Get ready for our final double-header of the NFL season!

If you are craving extra content during the week, catch NBC’s Pro Football Talk, hosted by Mike Florio and Chris Simms, every Monday-Friday at 7pm on Sky Sports Action (note the show may be moved for other live sports coverage).

Also, Inside the Huddle is available both in video and audio form. Airing on Wednesday at 9pm on Sky Sports Action, Neil Reynolds, coach Jeff Reinebold and guests will ensure you are up to date with all the latest news and talking points.

If you cannot catch the show live, it is available On Demand and as a podcast.