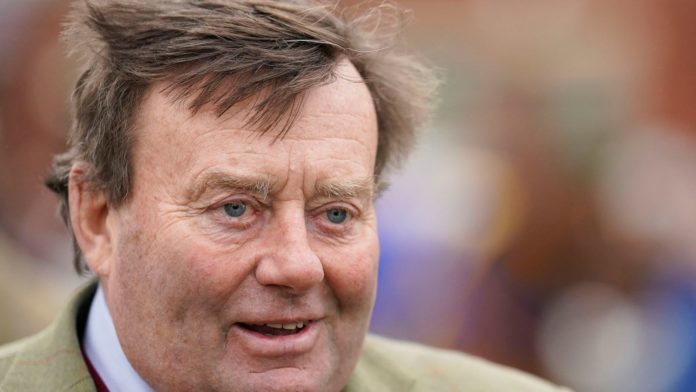 Unbeaten mare Marie’s Rock is among the entries for Haydock’s Sky Bet Supreme Trial Rossington Main Novices’ Hurdle – but the forecast heavy ground may put her participation in doubt.

The Middleham Park Racing-owned Marie’s Rock has been very impressive in two runs over hurdles to date, and is prominent in the betting for the mares’ novices’ hurdle at the Cheltenham Festival.

While connections of the Nicky Henderson-trained five-year-old would like to get another run into her, they would not be perturbed either to head straight to the big meeting in March.

“She’s won on soft twice, once over course and distance, but her options are limited now,” said Tom Palin, of Middleham Park.

“Myself and Mr Henderson have looked through the book, and there isn’t really a perfect race – a two-mile, Grade Two or Three mares’ only novices’ hurdle – between now and the Festival.

“We’ve always been quite flexible. We’ve been to Ffos Las, Haydock and Taunton – the syndicate have been brilliant, allowing us to get on with it, and I don’t think this will be any different.

“It’s heavy ground already, there’s a lot of rain forecast, and she’s got speed – it’s probably her most potent asset.

“She’s been on soft twice and handled it, but ‘Haydock heavy’ is a different kettle of fish.”

The five-year-old’s presence on Saturday is therefore far from certain.

Palin added: “She’s the highest-rated novice mare in the country, and it’s whether we should be going again on heavy ground?

“I’d say she’s less than likely to take her chance, but we can see what it looks like later in the week.

“Mr Henderson said we don’t necessarily need to see her again before Cheltenham.

“She’s jumped well to date, as all Mr Henderson’s do. I’d love to run her – but sometimes you have to err on the side of caution when you’ve got an unbeaten mare like her.”

Also entered is Nicky Richards’ promising Ribble Valley, who has the option too of stepping out of novice company to run in the New One Unibet Champion Hurdle Trial on the same card.

He is one of nine in that event – along with Fighting Fifth winner Cornerstone Lad, Triumph Hurdle hero Pentland Hills, Call Me Lord and Joseph O’Brien’s Darasso.

In the Grade Two Patrick Coyne Memorial Altcar Novices’ Chase, Brian Ellison’s Windsor Avenue may be given the chance to put a disappointing display at Doncaster behind him.