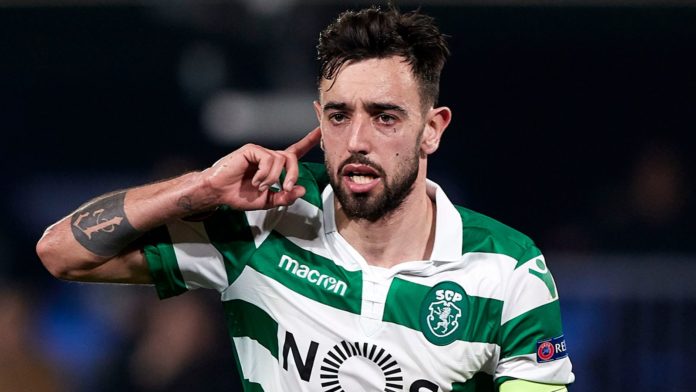 The 25-year-old has eight goals and seven assists in 15 games for Sporting this season; Fernandes is currently under contract at the Portuguese club until 2023

Sporting also want United defender Marcos Rojo included in any deal that would take the midfielder to OId Trafford, according to Filipe Dias, editor-in-chief at Portuguese daily newspaper O Jogo.

The outlet is reporting that Sporting’s president Frederico Varandas and the Liga NOS club’s director Hugo Viana were in the UK last week negotiating the transfer.

The 29-year-old, who joined United from Sporting Lisbon in 2014, almost left for Everton last summer and has started one Premier League game this season.

Sporting would want to discuss the possibility of other players leaving United for the Portuguese side, if Rojo chooses to remain as a part of Ole Gunnar Solskjaer’s squad.

A move for Fernandes would represent a U-turn as far as United are concerned, they scouted him in the summer before ruling out a move for the attacking midfielder.

Fernandes scored twice in Sporting’s 3-1 win at Setubal on Friday.

After the match, Sporting head coach Silas was asked if he would be available to play against Benfica on January 17.

He said: “I can’t guarantee any of these things because I don’t know. Bruno is a huge player and all players like him have a lot of market. I don’t like to think about it, but I’ll be thinking of alternatives in case Bruno leaves.

“I hope it doesn’t happen, but we have to start thinking that.”

It is thought that Sporting want to secure a £60m deal for Fernandes.