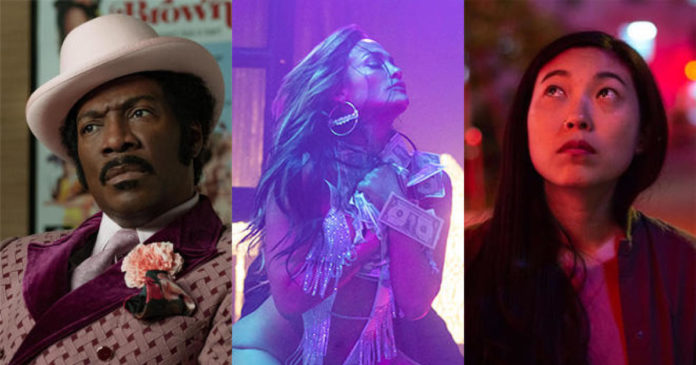 The announcement of nominations for the 92nd Academy Awards left some Hollywood stars and promising up-and-comers empty-handed Monday, with a roster of acting nominees that skewed white and the director nominees all male. Meanwhile, an R-rated character drama surprisingly screamed up a leading 11 nominations from an academy usually averse to comic-book legends.

“Joker” earned a Best Picture nomination, as well as nods for Best Director (Todd Phillips), Best Actor (Joaquin Phoenix), adapted screenplay, cinematography, editing, costumes, score, hair and makeup, and sound mixing and sound editing — a strong showing for the dark, violent drama (which nonetheless earned more than $1 billion at the box office). “The Irishman,” “Once Upon a Time … in Hollywood,” and “1917” followed with 10 nominations apiece.

But many movie fans were dismayed by the list of talents left out. Notably, not a single female director made the cut this year.

Greta Gerwig, the most recent female Best Director nominee two years ago for “Lady Bird,” failed to repeat that honor this year for Best Picture nominee “Little Women” (though she did earn a screenwriting nomination). Neither, for that matter, did Olivia Wilde for directing “Booksmart” (a comedy that was shut out completely), Lulu Wang (“The Farewell,” also shut out), Marielle Heller (“A Beautiful Day in the Neighborhood”), or Celine Sciamma (“Portrait of a Lady on Fire”).

The director nominees instead were Phillips, Sam Mendes for “1917,” Quentin Tarantino for “Once Upon a Time … in Hollywood,” Martin Scorsese for “The Irishman,” and Bong Joon Ho for “Parasite.”

“Congratulations to those men,” quipped presenter Issa Rae as she and John Cho announced the nominees Monday morning.

In the Best Actor category, Eddie Murphy’s sparkling performance as a wannabe blaxpolitation star in “Dolemite Is My Name” and Jamie Foxx’s powerful turn as a wrongly convicted man in “Just Mercy” were both shut out. Also passed over were Robert De Niro’s rueful mob hitman in “The Irishman,” Golden Globe-winner Taron Egerton’s reincarnation of Elton John in “Rocketman,” Christian Bale’s race car driver in “Ford v Ferrari,” Adam Sandler in “Uncut Gems,” “Robert Pattinson in “The Lighthouse,” and Daniel Craig in “Knives Out.”

The category only had room for five names already familiar from the awards circuit: Antonio Banderas, Joaquin Phoenix, Leonardo DiCaprio, Adam Driver and Jonathan Pryce are this year’s nominees.

(While De Niro wasn’t included in the actor nominees, he can console himself with a producer credit in the Best Picture category.)

Cynthia Erivo, who starred as Harriet Tubman in “Harriet,” earned two nominations — for Best Actress, and also Best Original Song. But she was the sole non-white actress in the category, which had an unusually strong list of contenders this year. The other nominees are Renee Zellweger, “Judy”; Scarlett Johansson, “Marriage Story”; Saoirse Ronan, “Little Women”; and Charlize Theron, “Bombshell.”

The Supporting Actor category was pretty much a lock for the five nominees — Anthony Hopkins (“The Two Popes”), Al Pacino and Joe Pesci for “The Irishman”; Brad Pitt (“Once Upon a Time in Hollywood”); and Tom Hanks (“A Beautiful Day in the Neighborhood”) — so there was no room for hopefuls Wesley Snipes (“Dolomite Is My Name”), Willem Dafoe (“The Lighthouse”), John Lithgow (“Bombshell”), or Ray Liotta (“Marriage Story”).

Other snubs and surprises

Elton John and Bernie Taupin earned a Best Original Song nod for “(I’m Gonna) Love Me Again” from “Rocketman,” and Randy Newman is back for the latest “Toy Story,” but some familiar names from the shortlist, like Beyoncé (“The Lion King”), Pharrell Williams (“The Black Godfather”) and Radiohead’s Thom Yorke (“Motherless Brooklyn”) did not make the finals.

The Best Documentary Feature category was missing such strong and popular contenders as “Apollo 11” and “The Biggest Little Farm,” while of the nominees for the Best Animated Feature category, Disney’s “Frozen II” was frozen out.

There were few surprises of omission in the technical categories, though the editor of “Once Upon a Time … in Hollywood” was weirdly missing, given the film’s 10 nominations in other categories. A happy surprise: “Parasite” is up for Best Production Design.

The costume designers did not see fit to honor the theatrical garb of “Rocketman,” the strip-club attire of “Hustlers,” the Scandinavian folkloric adornments of “Midsommar,” the knightly wardrobe of “The Man Who Killed Don Quixote,” or Chris Evans’ sweater in “Knives Out.”

One omission that wasn’t a surprise: the much-maligned digital fur of “Cats” did not get a nomination in the Best Visual Effects category.