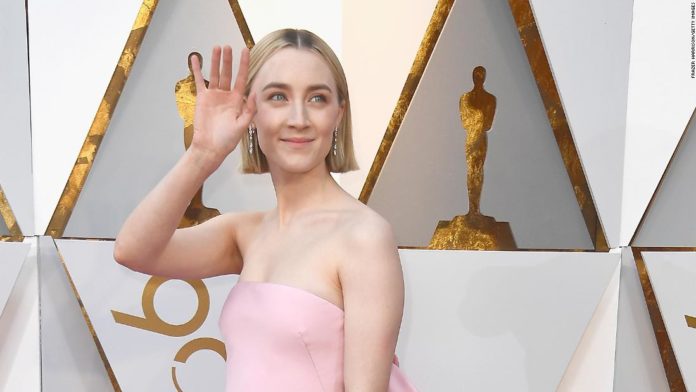 Saoirse Ronan, Martin Scorsese, Kathy Bates were among those named, while Jennifer Lopez was snubbed for her much talked about role in “Hustlers.”
Here’s how those nominated reacted this morning when they heard the news:

“!!! I’m just so thrilled that our Little Women has been recognized by the Academy. Greta made something so special that I’m just thankful to have been a part of, let alone nominated for. Thank you to my academy peers for loving and appreciating this film that is so close to my heart.”

“We are profoundly overwhelmed and honored to have received all these nominations from the Academy, and to have made history by being only the third movie ever to be nominated for Best Picture that’s written, directed and produced exclusively by women. This film is a testament to the brilliance of Greta Gerwig. She is the most brilliant creative talent working in our industry today, and we are thrilled that she and our beautiful film have been recognized.”

“Bringing The Irishman to the screen was a twelve-year saga which I wanted to make with my friends and work again with Marty, Joe and Al – It was a story that Jane, Emma, Marty and I wanted to tell. It’s great that the picture has been embraced by audiences and is now getting this recognition from the Academy. I’m very happy for everyone involved in the film.”

“I’m honored that our work on The Irishman has been honored by the Academy with these nominations. We put all of ourselves into this picture, a true labor of love, and to be recognized in this way means a great deal to all of us.”

“What a joy it was to work on this movie – with such brilliant direction by Scorsese and the extraordinary acting by De Niro, Pacino and Pesci and all the cast – and then an Oscar nomination? What a thrill!”

Arianne Phillips, Costume Design — “Once Upon a Time… In Hollywood”

“Thrilling to be acknowledged by my peers and especially sweet to be nominated alongside my Once Upon A Time…in Hollywood family. Quentin challenged me to get a nomination when we were prepping the film, so thrilled to be able to deliver!”

“I couldn’t be more thrilled. This movie was a labour of love for many people – myself included – so to see it recognised in this way is very moving for all of us. I would like to thank the Academy on behalf of my fellow producers, and on behalf of every single person who put their heart and soul into this film. Thank you.”

“In one of the languages of our film: Sanctus stercore! (Latin for holy shit!) Gratitude to the Academy generally, our writer’s branch specifically, and to Netflix and Fernando and our entire team. Delighted especially for the richly deserved recognition for Jonathan and Sir Anthony. Their performances will endure.”

“In a year with so much great writing, I’m honored and thrilled to be on that list with people I admire and respect. Love and gratitude to my fellow writers in the Academy!”

“Thank you to the Academy for this wonderful recognition. I am very proud of this film and it was truly an honor to work with the legendary Clint Eastwood on bringing the truth of Richard Jewell to light, along with the incredible Paul, Sam, Olivia, Jon, Nina, Ian and Niko. My hope is that this film brings the justice and peace Richard and Bobi Jewell deserve by shining a light on their story and his heroism.”

“Joker began as an idea, an experiment really— could we take an ‘indie approach’ to a studio film by inverting it into a character study to reflect the world around us? Explore what we’re seeing and feeling in society, from the lack of empathy to the effects of the absence of love. I am deeply honored by the overwhelming recognition of the Academy this morning, and I want to thank the genius that is Joaquin Phoenix, and all my incredible collaborators. We are beyond humbled that our peers in the filmmaking community have embraced the film and its message.”

“To receive two Oscar nominations for a film paying tribute to Harriet Tubman, a person whose heart and spirit are the embodiment of courage, makes this morning’s news beyond anything I could have ever imagined. This is more than a dream come true. When I got the opportunity to play this incredible woman, I felt truly honored that Kasi and our producers saw fit to have me play the part; being asked to co-write and perform the song in the film was the icing on an already wonderful cake. I continue to feel overwhelmed with gratitude today to the Academy for recognizing my performance and our song ‘Stand Up’.”

“Thank you very much to the Academy for this incredible honor. This Rocketman journey has been one of the highlights of my life and I’m grateful to be sharing this honor with my longtime friend and collaborator, Elton. We have personally and professionally supported each other for decades, and my goal in writing these lyrics was to honor his legacy, strength, and perseverance as both an icon and compassionate friend. To think that what started as a chance encounter over 5 decades ago in a London diner would take us both on the journey of a lifetime is beyond even my imagination. I’m humbled and deeply grateful for this prestigious recognition of our work together.”