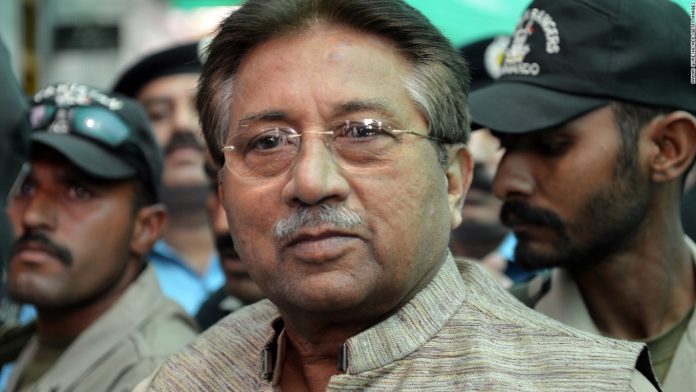 The 76-year-old, who has been living in self-imposed exile in Dubai since 2016, is now a free man and can freely return to Pakistan, Lahore’s High Court ruled Monday.
The former leader was last month sentenced to death in absentia for high treason following a six-year legal case.
A three-member special court convicted Musharraf of violating the constitution by unlawfully declaring emergency rule while he was in power in the 2000s.
That death sentence has now been overturned, after the High Court ruled high treason is an offense which cannot be committed by a single person.
It said the formation of the special court which passed the original death sentence was “illegal” — meaning Musharraf is no longer a suspect.

Musharraf seized power in a military coup in 1999, and ruled Pakistan as its President between 2001 and 2008.
In 2007, he declared a state of emergency, suspended Pakistan’s constitution, replaced the chief judge and blacked out independent TV outlets.
Musharraf said he did so to stabilize the country and to fight rising Islamist extremism. The action drew sharp criticism from the United States and democracy advocates. Pakistanis openly called for his removal.
Under pressure from the West, Musharraf later lifted the state of emergency and called elections in which his party fared badly.
He stepped down in August 2008 after the governing coalition began taking steps to impeach him.
Musharraf then went into exile, but returned to Pakistan in 2013 with the aim of running in the country’s national elections. Instead, his plans unraveled as he became entangled in a web of court cases relating to his time in power.
The former leader was indicted in 2014 on a total of five charges, including three counts of subverting, suspending and changing the country’s constitution, firing Pakistan’s chief justice, and imposing emergency rule.
It was the first time in Pakistan’s history that an army chief has been tried and found guilty of treason. Under Pakistan’s constitution, high treason is a crime that carries the death penalty or life imprisonment.
Musharraf has been living in Dubai since 2016 after Pakistan’s Supreme Court lifted a travel ban allowing him to leave the country to seek medical treatment. From his hospital bed in Dubai last month, the former leader said in a video statement that he was innocent and the treason case was “baseless.”