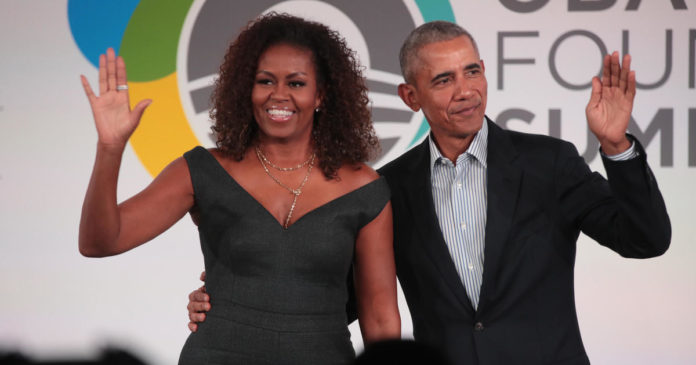 “Glad to see American Factory’s Oscar nod for Best Documentary,” the former president tweeted. “It’s the kind of story we don’t see often enough and it’s exactly what Michelle and I hope to achieve with Higher Ground. Congrats to the incredible filmmakers and entire team!”

Filmmakers Julia Reichert, Jeff Reichert and Steven Bognar are up for the award for the film that first debuted during the 2019 Sundance Film Festival. Other films nominated in the best documentary feature category include “The Cave,” “The Edge of Democracy,” “For Sama” and “Honeyland.”

“I couldn’t be happier that Julia Reichert, Steven Bognar, and all of the incredible people behind #AmericanFactory have been nominated for the Best Documentary Oscar,” the former first lady wrote on Instagram. “What Julia and Steve capture on film is at times painful, at times exhilarating, but always thoughtful and always real.”

The documentary “takes a deep dive into a post-industrial Ohio, where a Chinese billionaire opens a new factory in the husk of an abandoned General Motors plant and hires two thousand blue-collar Americans,” according to a Netflix press release.

Mr. Obama, who unsurprisingly included “American Factory” on his list of favorite movies of 2019, said he liked the film “for its nuanced, honest portrayal of the way a changing global economy plays out in real lives. It offers a window into people as they actually are and it’s the kind of story we don’t see often enough.”

In 2018, the couple signed a multi-year agreement to produce films and series for Netflix through Higher Ground. The production company was created to “harness the power of storytelling,” according to Mr. Obama. The seven projects they have planned will touch on “issues of race and class, democracy and civil rights” and “will educate, connect, and inspire us all.”

The 92nd Academy Awards will air live February 9 on ABC.

Regional rappers on the rise as industry gets hip to accents

Your guide to the SAG Awards