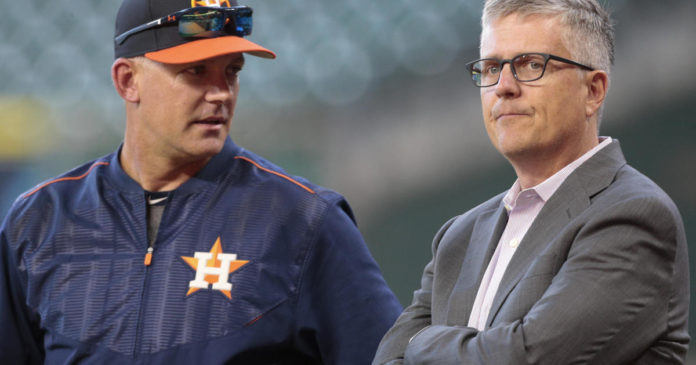 The Houston Astros on Monday fired general manager Jeff Luhnow and manager A.J. Hinch after Major League Baseball found that the club used technology to steal signs during the 2017 and 2018 season. Jim Crane, the team’s owner, announced the firings in a news conference Monday.

“If you read the report, neither guy implemented the system, but neither tried to stop it and the consequences are severe,” Crane told reporters.

The league had announced an unpaid, one-year suspension for Luhnow and Hinch. The Astros will also pay a $5 million penalty and forfeit their first and second-round picks in 2020 and 2021.

Last month, The Athletic reported that the team stole signs from a centerfield camera trained on the opposing team’s catcher. Players studied a monitor and warned their batters a certain pitch was coming.

Investigators interviewed 68 witnesses, including current and former Astros players, and reviewed tens of thousands of emails, text messages and videos. The investigative report said: “Virtually all the players had some involvement or knowledge of the scheme. Many admitted that they knew the scheme was wrong.”

“I find that the conduct of the Astros, and its senior baseball operations executives, merits significant discipline,” Commissioner Rob Manfred said in the league’s nine-page ruling.

“The conduct described herein has caused fans, players, executives at other MLB clubs, and members of the media to raise questions about the integrity of games in which the Astros participated. And while it is impossible to determine whether the conduct actually impacted the results on the field, the perception of some that it did causes significant harm to the game,” Manfred said.

The league is also investigating sign-stealing allegations against the Boston Red Sox, who allegedly used video replay to steal signs between opposing pitchers and catchers during their 2018 World Series run.