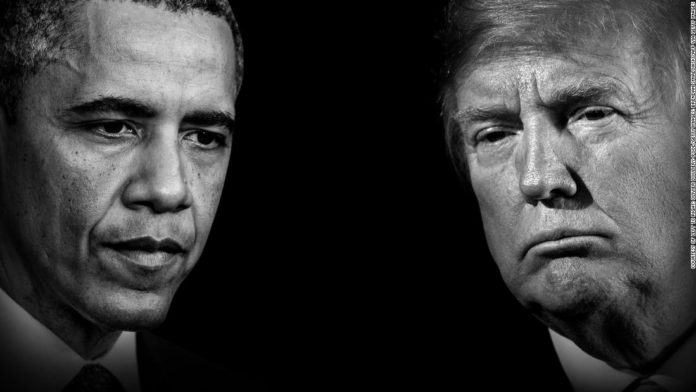 Producer Michael Kirk and his team begin with President Obama’s final State of the Union address, in which he cited deepening of “the rancor and suspicion between the parties” as representing “one of the few regrets of my presidency.”
It’s a far cry, certainly, from the hopeful picture that Obama painted with his introductory “one America” speech at the 2004 Democratic National Convention, which vaulted him into national political prominence.
Still, New Yorker journalist Jelani Cobb suggests that Obama’s notion of being a unifier was “a doomed mission from the start,” exacerbated by the near-economic meltdown that preceded his election. Republican strategist Steve Schmidt calls that period “the defining event of this generation,” one that “profoundly reshaped American politics.”
Obama’s election fueled division along a number of lines, but both Schmidt and pollster/consultant Frank Luntz cite 2008 vice presidential candidate Sarah Palin as a key figure in the hardening of the two sides. Luntz points to her utter rejection by the left, while Palin’s “obliteration of fact from fiction, of truth from lie,” as Schmidt puts it, helped pave the way for charges of “fake news” and “alternative facts” that have become familiar during the Trump presidency.
Kirk meticulously represents a wide variety of voices, punctuating the documentary throughout with audio from latenight TV hosts and conservative talkradio, underscoring the cultural divide.
Still, for every misstep or misreading of the electorate attributed to Obama, the journalists and Democrats interviewed return to what the Washington Post’s Wesley Lowery calls the “true hysteria” that his election unleashed in conservative media — a sense of resentment that Donald Trump successfully mined, Obama strategist turned CNN contributor David Axelrod notes, in launching his political run.
Trump “did not create the ugliness” that came to permeate U.S. politics, says author Matt Bai, but he is “its beneficiary, 100 percent” — and in contrast to his predecessors, has sought to govern with little evident interest in promoting unity.
As Steve Bannon, Trump’s former chief strategist says, “We didn’t win an election to bring the country together.”
The irony, of course, is the media that Trump and his supporters lustily deride played a clear role in facilitating his rise, a point illustrated with a medley of footage — much of it on CNN — showing news networks eagerly taking Trump speeches live, with cameras trained on empty podiums as a symbol of their desire not to miss a moment.
“The news media gave him a lot of airtime,” says PBS’ Judy Woodruff.
The sobering takeaway from “America’s Great Divide,” explored at some length in the second half, is whether the nastiness that defines current political discourse is irrevocable.
Russia, it’s noted, orchestrated its social media efforts to “strike at the fault lines of American democracy,” and the creation of media bubbles has made high-minded language about American commonalities more difficult to realize.
“We’re not going back to politics as usual,” Lowery says, while journalist Joshua Green refers to the gap between right and left, potentially, as “an unbridgeable chasm.”
“America’s Great Divide” admirably chronicles how we got from there to here, from the Trayvon Martin killing to Brett Kavanaugh’s Supreme Court confirmation hearings, from birtherism to Charlottesville.
What the PBS documentary can’t do, ultimately, is identify a cure for the condition that it diagnoses. But then again, neither can America.
“America’s Great Divide” airs Jan. 13-14 at 9 p.m. on PBS.