Home World Can anyone get Boeing through this mess? He’s going to try 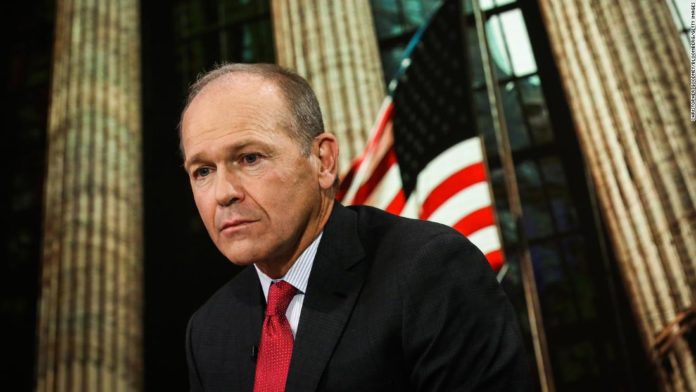 As he steps into the CEO job on Monday, Calhoun is tasked with winning approval for the 737 Max to fly again, a first step in ending a 10-month crisis that has cost the company billions of dollars. He must also work to regain Boeing’s reputation for safety and quality that was badly damaged by the plane’s grounding in March following two crashes that killed 346 people.
To succeed, Calhoun, a veteran of General Electric (GE), private equity firm Blackstone and media measurement firm Nielsen, will have to win back the trust of a number of groups.
“What’s Boeing (BA) need right now? It needs an inspirational leader,” said Ron Epstein, aerospace analyst with Bank of America Merrill Lynch. “You have a work force demoralized by what’s happened. You have to make airline customers comfortable, make regulators comfortable. You need to be a good operator because your largest production line is shutting down. Can Dave do all that? I’m not sure.”

How long does he have?

And he may not have much time to do what needs to be done.
Calhoun turns 63 years old later this year. Boeing (BA) has not had a CEO older than 65 at any time in the last 50 years.
“We have a retirement policy that generally requires retirement at age 65, but the board has the discretion to waive it in any particular instance,” said a Boeing spokesman. Some outside observers don’t think Calhoun will be one to buck that trend and continue in the role to age 66 and beyond.
“I think the way the situation arose, it seems like he’s more in position as a caretaker,” said Epstein.
Winning back trust got even tougher with the recent release of a trove of internal company communications in which Boeing employees mocked the 737 Max and questioned its safety.
One employee described the jet as “designed by clowns, who in turn are supervised by monkeys.” Two other employees agreed that they would not allow their family members to fly on the plane. Boeing’s release of the documents included an apology to the FAA, Congress, airlines and their passengers.
While the documents were made public on Thursday, they were turned over to the FAA at some point in December. The company went into that month hoping that it could still win approval for the plane to fly again before the end of 2019. But FAA Administrator Stephen Dickson announced on Dec. 11 that such approval would not happen until sometime this year.
By the end of the month, the board had decided to replace CEO Dennis Muilenburg because “a change in leadership was necessary to restore confidence in the company moving forward as it works to repair relationships with regulators, customers, and all other stakeholders.”
“Probably the most important bridges to build right now are to regulators and the airlines. Those are the relationships which have been most wounded,” said Epstein.

The good news is that the company is large enough and financially healthy enough to survive the crisis. It had $10.9 billion in cash on the balance sheet as of Sept. 30, and a good enough credit rating to be able to raise additional funds in capital markets, if necessary.
And perhaps the greatest advantage for Boeing is that there really is no alternative to its survival.
Boeing and rival Airbus are a duopoly, providing virtually all the commercial jets needed by the global airline industry. Once an airline picks one model of plane for a certain segment of the market, such as the single aisle jets that include the 737 Max, there are significant costs to shifting to the other company’s models. Pilots qualified to fly the 737 would need to be retrained to fly the Airbus A320. And keeping a supply of spare parts for both planes at the various airports is costly.
And both companies have such a large backlog of orders for its jets that if an airline were to drop an order for the 737 Max and replace it with an order for an Airbus A320, it would have to wait years to get the planes it needs.
But that doesn’t mean Boeing’s finances aren’t being hurt by the crisis.
It has been in the process of reaching deals with the airlines as compensation for the Max’s grounding. It has already taken a $5 billion charge for those costs. When it reports financial results on Jan. 29, it is likely to report that total costs stemming from the 737 crisis will have more than doubled, according to analysts.
The company had continued to build the Max for the last year even without being able to deliver it. It is preparing to temporarily halt production of the model in the middle of this month.

Still, despite the many challenges that await Calhoun, the position of Boeing CEO is apparently one he’s been interested in for some time.
Calhoun has been on the Boeing board since 2009. According to Richard Aboulafia, aerospace analyst with the Teal Group, Calhoun was an outside candidate to be CEO of Boeing in 2015 when the board instead tapped Muilenburg, then a 30-year veteran of the company. Company spokespeople did not comment on whether he had been a candidate.
Calhoun stayed on the Boeing board, as well as a number of other corporate boards in the decade since, though since he was tapped as CEO he has been in the process of leaving his other positions.
In October the board stripped Muilenburg of the position of chairman, giving the position to Calhoun. In November Calhoun, in one of his first interviews as chairman, voiced confidence in Muilenburg as the right man to get Boeing out of its 737 Max crisis.
“It’s a tough, important task. And we believe he’s up to it. He is an asset,” he said in an interview on CNBC But he also made clear that the leash would be short.
“The board deliberates every single meeting on the subject of our leaders and how well they’re doing and do they have our confidence,” said Calhoun at that time.
That’s a reality he’ll have to keep in mind as he becomes CEO.