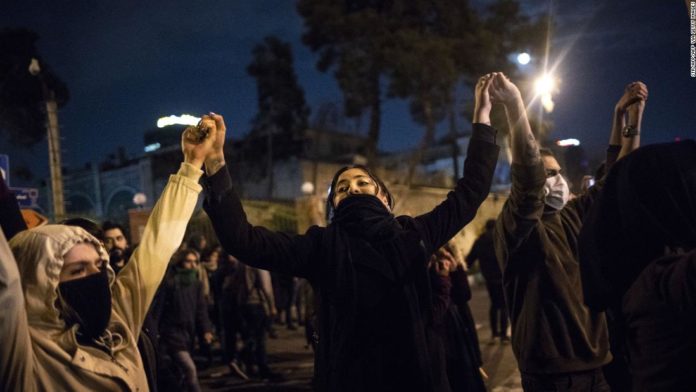 After days of denial and obfuscation, Iranian officials finally acknowledged early Saturday that its military had shot down a Ukraine International Airlines jet, killing all 176 people on board, many of whom were Iranian citizens.
Iranian Foreign Minister Javad Zarif blamed “human error” prompted by “US adventurism,” alluding to the escalating brinkmanship between Iran and the United States over the US killing of a revered Iranian commander, Qasem Soleimani.
But the Iranian government’s tendency to point the finger at Washington, or other malicious foreign actors, for unrest at home is ringing hollow now. While the Trump administration has fomented a fractious atmosphere, it was not responsible for this accident.
Tehran’s admission appears to have re-ignited the anti-government sentiment that raged last year, despite the wave of nationalism followed Soleimani’s death earlier this month.
As crowds gathered in the capital Tehran for a candlelight vigil on Saturday to commemorate victims, protesters called for Supreme Leader Ayatollah Ali Khamenei to step down and for those responsible for downing the plane to be prosecuted. Familiar chants of “Death to America,” were traded for “Death to the dictator” and “Death to the liar.” In one video, demonstrators chanted, “Khamenei have shame. Leave the country.”
This reckoning is already being billed as Iran’s “Chernobyl” moment, an analogy to the way the 1986 nuclear disaster in the Soviet Ukraine “exposed all the incompetence, state deception and rot in that regime,” according to IranWire, a site for Iranian citizen journalists in the diaspora.”
But whether Iran’s grief and fury could lead to revolution is hard to tell.

“Through a western lens, we’re always looking for a revolutionary moment [in Iran],” said Sanam Vakil, a senior research fellow and leader of the Iran Forum at London-based think tank Chatham House.
While there are certainly similarities between how authorities handled the Chernobyl accident and the downing of Ukraine International Airlines Flight 752 — repeated denials, attempted cover-ups, inescapable evidence from foreign governments, and a reluctant admission — the parallels may end there, she said.
“This could be ‘Iran’s Chernobyl moment,'” said Vakil. “But the question is how is Iranian leadership going to handle it. [After Chernobyl] everything was very much incumbent on one political leader making a decision to accept responsibility and alter political dynamics.”
“The only person who can really make meaningful changes in the Iranian political system is the Supreme Leader,” she points out.
And if history is any judge, Khamenei could move to violently quash protests, as he did during anti-government protests that gripped Iran late last year. How Tehran reacts now to the protests has drawn both international and domestic scrutiny, with warnings from US President Donald Trump that the “world is watching” and “do not kill your protesters.”
For an uprising to become a revolution, the opposition needs its own leadership and a shared ideology, according to Emmanuel Karagiannis, a senior lecturer at the Department of Defense Studies at King’s College London.
But Iranian protesters have neither, he said, dismissing recent demonstrations as a “spontaneous and grassroots” movement that draws across a broad mix of interests and loyalties, including students, professionals, trade unionists, and ethnic minorities.
“The Iranian regime has been in power for over 40 years. Of course, it could collapse but it’s hard to see that happening without the elements that would need to be in place … an organized and united opposition,” said Vakil.

Nevertheless, this moment seems different.
Unlike the previous groundswell of opposition, response to the downing of the Ukrainian passenger plane has triggered condemnation from conservatives too, who typically support the government. The editor in chief of right-wing Tasnim news agency — which is tied to the Islamic Revolution Guards Corps — criticized Iran’s leaders for attempting to lie to the public. “Officials who misled the media are guilty too,” Kian Abdollahi said on Twitter. “We are all ashamed before the people.”
That shame has grown under the harsh spotlight of a relentless news cycle and the outcry from Iranians on social media.
Though Iran’s state media did not cover this weekend’s protests, images and cellphone videos shared on social media has amplified the message of civilian anger. So too have public figures, who have spoken out online at great personal risk.
Oscar-nominated Taraneh Alidoosti, Iran’s most popular female actor, took to Instagram on Sunday to bluntly criticize the government, telling millions of followers that Iranians were “not citizens,” but “captives.” “I fought this dream for a long time and didn’t want to accept it. We are not citizens. We never were. We are captives,” she wrote.
“Ultimately the Islamic Republic is under pressure, because people really do want accountability and transparency,” Vakil said.
Perhaps Iran’s government spokesman described the situation best. In commentary published in the semiofficial Fars News Agency, Ali Rabiee said that the regime’s delayed admission to downing the plane had “irreparably damaged the relationship between us and our nation.”
The question now is what Tehran will do about it.