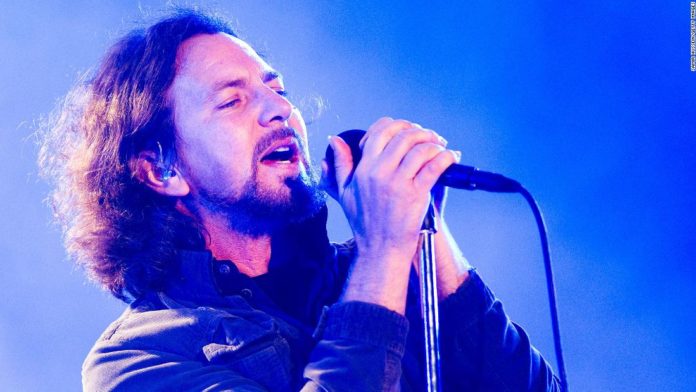 “Gigaton,” expected to be released March 27, is the first album from Pearl Jam since the 2013 release of their Grammy Award-winning album “Lightning Bolt.”
It’s their 11th studio album and is available for preorder now.
“Making this record was a long journey,” lead guitarist Mike McCready said in a statement. “It was emotionally dark and confusing at times, but also an exciting and experimental road map to musical redemption. Collaborating with my bandmates on Gigaton ultimately gave me greater love, awareness and knowledge of the need for human connection in these times.”
The first single, “Dance of the Clairvoyants,” will be released in the coming weeks, a statement on the band’s website said.

A 16-date North American tour featuring Eddie Vedder and company is set to kick off March 18 in Toronto.
To ensure the band’s concert tickets are being sold at face value, they’ve partnered up with Ticketmaster — the ticket sales company the band once battled after accusing it of refusing to lower its service fees.
As a result, all tickets for the Pearl Jam concerts will be powered by Ticketmaster SafeTix, a type of ticket that uses a unique barcode that refreshes every couple of seconds so it can’t be screenshotted or counterfeited, according to the band’s website.

Some of the UK’s best-known museums ‘facing mothballing or permanent closure’, charity warns

Alphabet Is Grounding Loon—but Won’t Call It a Failure

Comedy steps up as a respite from our current woes

Google threatens to block search engine in Australia if forced to...

Abandoned Soviet nuclear missile base hidden in a Polish forest

Queen’s representative in Canada quits amid claims she bullied staff to...