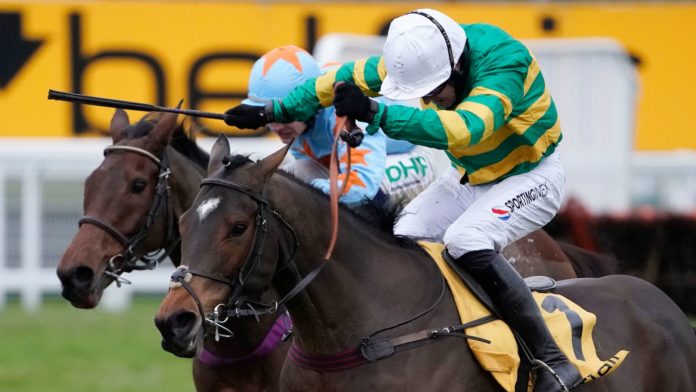 Philip Hobbs is confident Defi Du Seuil can confirm his superiority over Un De Sceaux and give him a first victory in the Matchbook Clarence House Chase at Ascot on Saturday.

Having defeated the Willie Mullins-trained 12-year-old by a neck in the Tingle Creek at Sandown, the JP McManus-owned gelding will bid to repeat that effort when the pair lock horns in the Grade One feature this weekend.

And while Hobbs expects Un De Sceaux to serve it up to Defi Du Seuil once again, he reports his stable star to be in good order ahead of his bid to claim a seventh top-level success.

Hobbs said on Tuesday: “I’m sure it ought to be close again and he (Un De Sceaux) has been a fantastic horse for a long time.

“It is amazing how he has kept going so well. He is obviously a horse very much to be feared, but we beat him last time and we hope we might again.

“He schooled yesterday morning and everything went well and he worked well this morning.”

Though Defi Du Seuil failed to feature on his only previous outing at Ascot, when beating only one home in 2017 Coral Hurdle, the Minehead handler believes he will have no problem handling both the course and the potentially testing conditions.

He said: “When he was fourth at Ascot that was during his below-par season, so it was probably not of any relevance.

“He has run on very soft ground plenty of times before. When he won the Finale Hurdle at Chepstow it was absolutely horrendous and he won very easily.

“Last season when he won the Scilly Isles it was very testing, so I don’t have any concerns over that.”

After making a late decision on which race Defi Du Seuil participated in at the Cheltenham Festival last year, Hobbs intends to do the same this season – whatever the result is at Ascot.

Hobbs said: “He is in the Champion Chase and Ryanair and we are open-minded as to what route he takes. It will depend on the ground and definitely opposition. If it goes well on Saturday I’m sure we won’t run him before Cheltenham, as we won’t need to.

“If it is good ground and the opposition is weaker in the Ryanair we can always change tack. Last year he was left in the Arkle and JLT until we had to declare two days before and we will do the same again. Who knows (if can beat Altior), as they haven’t met.

“Realistically, one of the reasons we started him over two miles at the start of the season was the fact that the two-mile division looked easier with Altior going further, but that might change now.”

It has been 18 years since Hobbs claimed his sole Champion Chase to date with Flagship Uberalles – a horse he describes as a completely different character to his contender for this year’s race.

He said: “Flagship Uberalles was completely different – he was twice the size and was fragile both mentally and physically.

“He would not be a horse you wanted to run too often, as mentally he wouldn’t stick it, but Defi is the opposite – Defi is very tough.”

While Rooster Booster will always be held in the highest regard by Hobbs following his victory in the 2003 Champion Hurdle, he feels Defi Du Seuil has the makings of being the best chaser he has trained, providing he continues his progression.

He said: “Rooster Booster would be the obvious best horse we’ve had as the day he won the Champion Hurdle he was very good.

“You can’t compare a top-class hurdler to a chaser as they are different horses. He is certainly potentially the best one (chaser) we have had.”