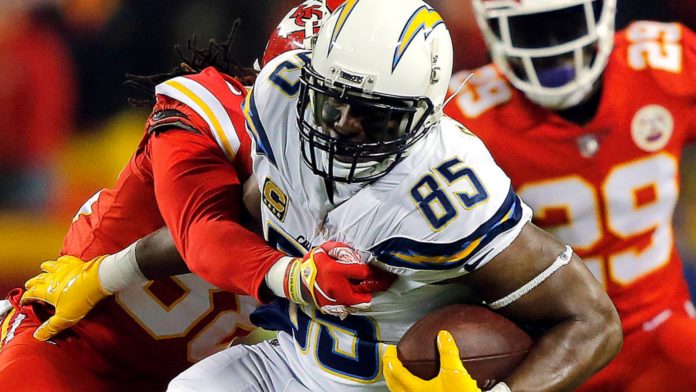 Los Angeles Chargers tight end Antonio Gates has announced his retirement after 16 years in the NFL – all of them with the franchise.

Gates signed for the Chargers, then playing in San Diego, in 2003 after going undrafted, largely because he did not play football during his time at Kent State, where he focused on basketball.

But he soon transformed into one of the game’s leading players in his position and retires as the Chargers’ career leader in receptions, receiving yards, and receiving touchdowns – he became only the second tight end in history to reach 100 career touchdowns during the 2015 season.

Gates ranks seventh overall in career receiving touchdowns (116) but is the leading tight end in that ranking, having passed Hall of Famer Tony Gonzalez by five.

“I never dreamed that I would play this game of football so long or how fortunate I would be to play it with just one organisation,” Gates said in a statement.

“While today I am officially retiring as a Charger, I am grateful that I will still be lending my services to the Chargers organisation – just now in a completely different capacity through the team’s community engagement initiatives and public facing events.

“I’m looking forward to beginning the next chapter of my career and am grateful for the opportunity to be back around the team and our fans.

“Thank you to everyone who has been part of this remarkable journey with me. I can’t wait to see what’s next.”