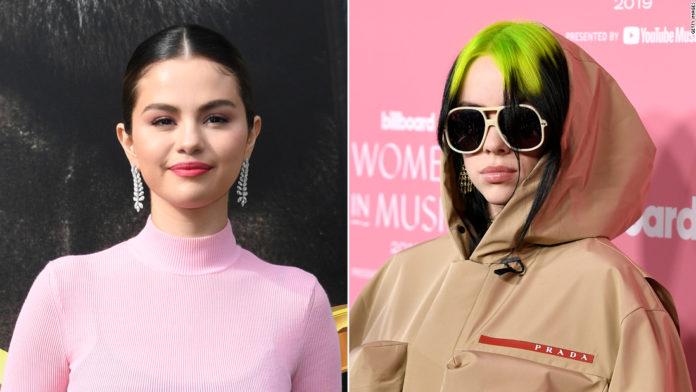 Jimmy Fallon asked “Wizards” star Selena Gomez if she knew the show’s theme song influenced Eilish’s hit when she appeared on “The Tonight Show” Monday. Turns out Gomez had heard and she loves it. (Finneas produces some of Gomez’s latest album, “Rare.”)
“We finished up the song and gave it to him [Finneas] to produce himself and he did an amazing job,” Gomez told Fallon, adding, “He’s obviously extremely talented.”
When Fallon played a clip of the old theme song, then “Bad Guy,” remarking how similar they are, Gomez said, “I love Billie.”
“That’s so cool, that’s so cool,” she said, adding that the album’s title is meant to encourage young women to be their unique selves.
[embedded content]
Listen to the Wizards theme here.
[embedded content]
“What was most important to ne with this record was to make sure every song actually means something and holds weight,” the singer said, and mentioned the track “Vulnerable” as one of her favorites.
“I’m hoping I could just be a voice for people in the same situation as I am, whether it’s mental, relationships, friendships that people struggle with,” she said. “The only thing I wanted to do was make people feel good.”