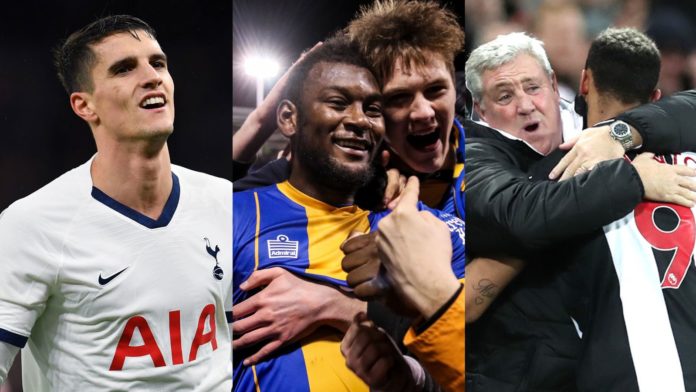 Premier League sides Tottenham and Newcastle made safe passage through to the FA Cup fourth round, while Shrewsbury beat Bristol City to set up a tie with Liverpool.

Tottenham rolled back the years as a pair of Argentinians delivered a 2-1 FA Cup victory in their third-round replay against Middlesbrough.

In days gone by, the old White Hart Lane was treated to some memorable nights as Ossie Ardiles and Ricky Villa had a love affair with the famous cup competition. This time it was Giovani Lo Celso and Erik Lamela who inspired Spurs with first-half goals that set up a meeting with Southampton in next weekend’s fourth round.

It also ended a four-game winless run in all competitions and further highlighted how Lo Celso and Lamela could become key men in Jose Mourinho’s reign.

Christian Eriksen started the game, but was jeered by Spurs fans as his name was read about before kick-off.

In just the second minute, goalkeeper Tomas Mejias tried to pass to Marvin Johnson but Lo Celso intercepted and coolly converted into the bottom corner.

Later, Lamela showed tenacity to rob Jonny Howson and then skill to breeze past two defenders before coolly rolling the ball home with the outside of his foot.

But with eight minutes remaining, Sanchez and Tanganga backed off sub George Saville and his low shot from 20 yards should have been kept out by Gazzaniga, who got a hand on the low shot.

Spurs were able to see it out and could even have extended their lead, but Son Heung-min could not convert after Tanganga’s storming run and cross and fellow substitute Dele Alli wasted a chance from the last kick.

Tottenham have now reached the FA Cup fourth round for the 13th time in the last 14 seasons, only missing out in 2013-14, when they lost to Arsenal in round three.

Joelinton ended his 20-game wait for a second Newcastle goal as the Premier League side dispatched League One Rochdale 4-1 to reach the FA Cup fourth round.

Controversial owner Mike Ashley, on Tyneside for transfer talks with head coach Steve Bruce, was among a crowd of 29,786 at St James’ Park to see the man for whom he paid £40million in the summer score with an 82nd-minute strike.

Eoghan O’Connell’s own goal had earlier set the Magpies on their way in the replay before Matty Longstaff and Miguel Almiron struck to make it 3-0 after just 26 minutes, with the returning Matt Ritchie providing the ammunition for the first two.

Brazilian Joelinton, whose last goal came at Tottenham on August 25, added a fourth before Jordan Williams’ late consolation strike as Newcastle – who have not reached the fifth round since 2006 – booked a home tie against third tier Oxford.

Shrewsbury set up an FA Cup fourth-round clash at home to Liverpool as Aaron Pierre’s fine late goal earned them a 1-0 win over Bristol City.

The League One side secured a memorable meeting with the unbeaten Premier League leaders thanks to Pierre’s low finish from outside the area in the 89th minute.

There were chances at both ends during a goalless first half, with City captain Josh Brownhill’s early drive well saved by goalkeeper Joe Murphy.

Shrewsbury defender Pierre’s long-range effort was just off target and home skipper Ollie Norburn’s shot was deflected narrowly wide. Nathan Baker went close with a header for the visitors before Famara Diedhiou
lifted his shot over the bar when he was sent clear with Murphy to beat.

Shrewsbury striker Daniel Udoh forced a fine save from Daniel Bentley at the other end with a powerful effort from just outside the area. Diedhiou fired wide for City early in the second half before home substitute Callum Lang’s header was well kept out by Bentley.

With extra-time looming, Shrewsbury delivered the knockout blow in the 89th minute as Pierre picked out the bottom corner to allow his side to dream of an even bigger upset.

Championship side Reading beat League One outfit Blackpool 2-0 in a replay to reach the FA Cup fourth round.

Goals from Lucas Boye and Jordan Obita either side of half-time at Bloomfield Road ensured Reading will entertain the victors of the encounter between Carlisle and Cardiff.

Blackpool goalkeeper Mark Howard initially kept out Obita’s 82nd-minute header but the Reading man slotted home the rebound to ensure his side progressed to the next round.

Coventry ran out comfortable 3-0 winners as they knocked Bristol Rovers out of the FA Cup to set up a fourth-round home tie at St Andrew’s with landlords Birmingham.

Coventry took an early lead when Callum O’Hare threaded a beautifully weighted ball through the Rovers defence, allowing Maxime Biamou to race through and slot past Jordi Van Stappershoef.

Jonson Clarke-Harris almost pulled Rovers level after 23 minutes when his powerful header rattled the Coventry bar. But the second half saw Coventry make the most of their domination. O’hare was provider yet again after 51 minutes when another through ball played a team-mate one-on-one with the goalkeeper. This time it was Josh Pask the recipient, who calmly finished past Van Stappershoef, doubling the home side’s lead.

Coventry looked even better value for their lead moments later when Biamou scored his second. A clever Sky Blues corner found Liam Walsh unmarked in the box, the midfielder drilling a ball across goal which was easily turned in by the lurking Biamou.