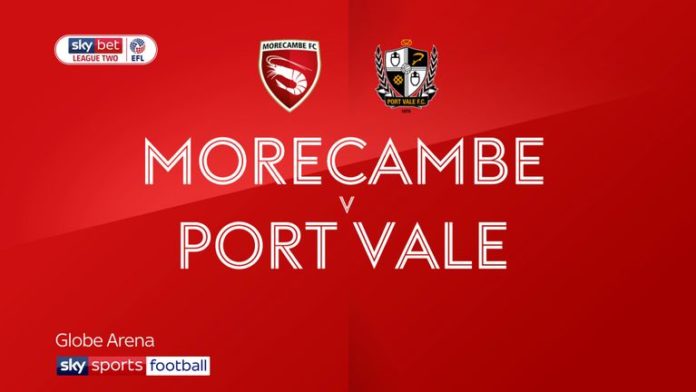 Struggling Morecambe picked up only their fifth win of the season as two early goals fired them past Port Vale 2-1.

Derek Adams’s side enjoyed the perfect start at the Globe Arena as they went a goal ahead after only six minutes. Adam Phillips swung in a left-wing corner which was met by central defender Steven Old who headed home his third goal of the season.

The Shrimps then doubled their lead six minutes later from a swift counter-attack. Carlos Mendes-Gomes fed Phillips down the right and he produced a firmly struck low cross that fell perfectly for the unmarked Cole Stockton to slide home the ball from close range.

Morecambe started the second half well, with George Tanner forcing Scott Brown into a neat save, before John Askey’s side came back strongly after a sluggish opening hour.

They hit back with a goal 19 minutes from time when Luke Joyce picked up a deep cross from David Worrall and teed up James Gibbons, who curled a delightful left-foot effort over Morecambe keeper Mark Halstead from 12 yards out.

Halstead then produced a stunning save to deny the Valiants an equaliser 12 minutes from time when he got down low to his right to save David Amoo’s close-range header.

Amoo then blazed an effort wide from a good opening as the home side held on for a much-needed win.