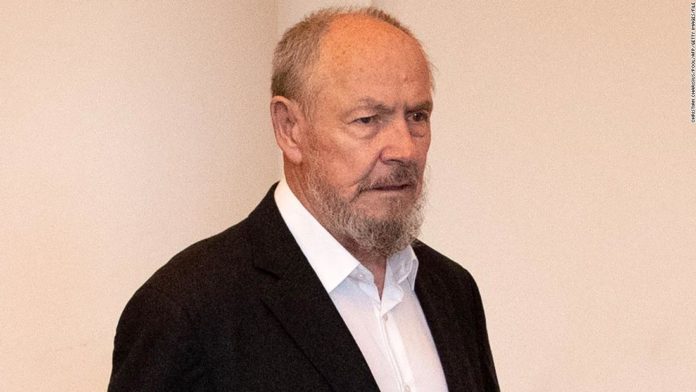 Moshe Peter Loth, the 76-year-old American witness and co-plaintiff in the trial of a former prison guard known as “Bruno D.,” hit the headlines in November when he tearfully hugged the accused in court and said, “Watch, everyone, I will forgive him.”
“Bruno D.” is standing trial in Hamburg accused of being an accessory to thousands of murders while serving in the SS as a guard between August 1944 and April 1945.
Loth, who says he is a Holocaust survivor, claimed he and his Jewish mother were imprisoned at Stutthof concentration camp, in Nazi-occupied Poland, after his birth on September 2, 1943, according to his lawyer.
He said he was the victim of medical experiments and had to live as an outcast even after the war, according to his lawyer.
It was at the camp that a prison number was tattooed on his and his mother’s arms, according to documents Loth submitted to the court, a spokesperson for the court told CNN.
On Monday, Hamburg district court spokesperson Kai Wantzen told CNN that research by the presiding judge Anne Meier-Göring found ”prison numbers were only tattooed in Auschwitz [concentration camp] but not at Stutthof.”
The court — which has been reviewing Loth’s documentation — therefore did not view Loth’s testimony as ”particularly credible and plausible,” Wantzen said.
It is unclear whether Loth and his mother, Helene, were incarcerated at the camp together, the court added.
On Monday, Loth withdrew from being part of the trial. He has not withdrawn his testimony, Wantzen added.
Loth’s lawyer, Salvatore Barba, declined to respond to numerous requests for comment from CNN in the past week, and instead referred CNN to his statement published by German news magazine Der Spiegel in December.
Barba said in a statement on Monday that his mandate had ended “after my client himself withdrew from the co-lawsuit.”
Through his lawyers, Loth told German news magazine Der Spiegel, which first reported doubts about his testimony, that he “had spent his whole life searching for his true identity.”
Cracks began to emerge in Loth’s account in December when Der Spiegel reported that Loth’s family was not Jewish. The magazine said it had seen documents from the registry office in Dortmund and church register entries, as well as one other unspecified registry office, suggesting they were Protestant.
CNN has not been able to independently verify Der Spiegel’s reporting on the religion of Loth’s family, and has reached out to the registry office in Dortmund.
Der Spiegel reported that Loth’s mother was imprisoned in the camp, citing records from Stutthof concentration camp. She was held for “education” for a short time in March 1943 and her inmate number was 20038, it reported.
According to camp records seen by CNN, Helene Loth was released from the camp on April 1, 1943 — months before Loth was born in September 1943.
Der Spiegel’s investigation, as well as CNN’s, found no evidence of Helene Loth’s Jewish origin in Stutthof concentration camp’s registry.
Barba told Der Spiegel that Loth had been “seeking his true identity all his life” and often only had oral accounts to rely on. Many questions are “unfortunately not answered to this day,” Barba told the magazine, adding that: “so far, he has found no reason to doubt these (oral) reports.”
The lawyer for Holocaust survivor Judith Meisel, who is one of 36 co-plaintiffs in the case, told CNN that Der Spiegel’s report “casts a shadow over this criminal case.”

The trial of 93-year-old “Bruno D.” is due to wrap up in May, the court said. According to the indictment, the former Nazi guard knowingly supported the “insidious and cruel killing” of 5,230 people at Stutthof.
Despite his advanced age, the defendant is being tried in a youth court because he was 17 years old when he joined the SS as a guard at the camp, according to a press release from Hamburg’s district court.
Prisoners in Stutthof were killed by being shot in the back of the neck, poisoned with Zyklon B gas, and denied food and medicine, court documents allege.
The defendant has admitted to being a guard at the camp, but told the court at the beginning of his trial that he had no choice at the time. Over the last few months, the court has heard harrowing testimonies from witnesses who now live across the globe.
Stutthof was a Nazi concentration and extermination camp located 22 miles east of Danzig — which is now the Polish city of Gdańsk.
First established by the Nazis in 1939, Stutthof went on to house a total of 115,000 prisoners, more than half of whom — some 65,000 — died there. Around 22,000 went on to be transferred from Stutthof to other Nazi camps.
It is believed that approximately six million Jewish people died in Nazi concentration camps during World War II. Also killed were hundreds of thousands of Roma people and people with mental or physical disabilities.
This story has been updated.