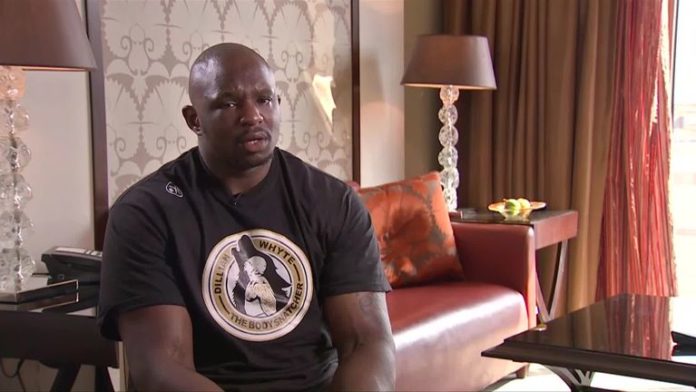 “Tall heavyweights start their careers very aggressively, but then?”

Dillian Whyte believes Anthony Joshua always showed signs of “not liking getting hit” and has accused his old rival of no longer being “aggressive” inside the ring.

Whyte firstly won an amateur fight between them and Joshua then avenged it with a knockout victory in a brutal British title fight four years ago.

“We’ve seen this before – Lennox Lewis was an aggressive fighter on the front foot but got knocked out by Hasim Rahman, then changed his style,” Whyte exclusively told Sky Sports.

“People forget Wladimir Klitschko was one of the most aggressive heavyweights for a long time, but he got done by Ross Puritty, Corrie Sanders and Lamon Brewster then changed his style.

“Joshua will be the same.

“Tall heavyweights start their careers very aggressively, but then?

“Even Deontay Wilder, when he was clocked a couple of times by Luis Ortiz, thought ‘I’m just going to wait’.

“We have seen this time and time again in history, and it’s always the same.”

Whyte insists that Joshua has always shown weaknesses. He said: “Let’s go further back – Carlos Takam, Alexander Povetkin, Joseph Parker. There were signs of caginess and not liking getting hit.”

Blessings still a flow like a river water ?? pic.twitter.com/BKvbOPU3Rz

Joshua is set to defend his newly-regained IBF, WBA and WBO titles in a UK homecoming with Kubrat Pulev leading the chase to be his opponent.

Whyte, meanwhile, is still waiting for his first opportunity at a world title. He has been the WBC’s No 1 contender for over 800 days but Wilder will defend that belt against Tyson Fury on February 22 with another fight between them pencilled in for later this year.

Whyte’s best chance of a world title fight could yet come in a rematch against Joshua, and he insists that he would accept that chance: “Of course. AJ says a lot of things. Listen, if he wants to fight me, the fight can happen.

“I’m here, I’m ready to fight, if he wants to fight me, the fight can happen. He’s a good fighter and a good champion, but he talks a lot of rubbish most of the time.

“Him, Wilder, Fury, they all talk the same rubbish. He says one thing and then he backtracks and says another thing. At least I’m consistent with what I say, and I do what I say.

Whyte believes that Ruiz Jr demonstrated the blueprint of how to defeat Joshua and warned he could do the same.

“I would come out and set about him,” he said about facing Joshua again.

“The first time we fought, we were amateurs. The second time [my then-trainer] Johnathon Banks told me: ‘Box him, stretch him out, let him gas’.

“That was the wrong strategy, now I look back. I should have been more aggressive in the early rounds because while I was boxing, he was being aggressive.

“Then I got tired. So I should have just gone for him. If I fought him again, I would press him.”

Whyte and Russian contender Alexander Povetkin have each expressed “interest” in fighting each other next.