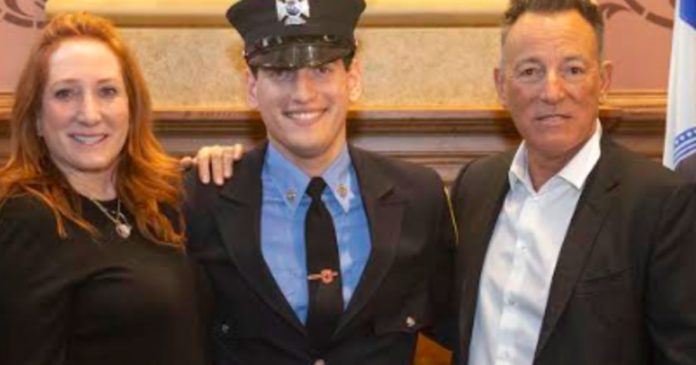 Bruce Springsteen’s youngest son Sam is “Tougher than the Rest” — he was sworn in as a New Jersey firefighter Tuesday, CBS New York reported. Proud parents, the legendary New Jersey performer and fellow musician, wife Patti Scialfa, were at the ceremony to cheer him on.

Sam was sworn in to the Jersey City Fire Department along with 14 others in his class, according to a press release from the mayor. The department is now 666 strong, including uniformed firefighters and superiors.

“It was a long road, he’s very dedicated, quite a few years and we are just excited for him today,” the rocker told CBS N.Y.

Springsteen and Scialfa, who have three children together, posed with Sam at the big event. Sam’s brother Evan also attended the ceremony.

In August, Scialfa took to Instagram to congratulate Sam on becoming a firefighter. Scialfa wrote, “You followed your dreams.” In the post, she included a black and white photo of her son.

Bruce offered insight into his relationships with his children during an interview with “CBS This Morning” co-host Gayle King in October. Springsteen told King how his complicated relationship with his father influenced how he raised his own kids.

“Yeah, there were a lot of mistakes I didn’t want to make. And I think the way you look at it is, like, I don’t want my kids to have to dig themselves out of my hole. They’re gonna have their own hole they got to dig themselves out of. That’s just part of life, you know? Now, you’re always gonna — we always pass something along,” he said. “And that’s just — that’s just life, you know? So as a parent, you do your best to not lay too much of your own bull**** on them.”