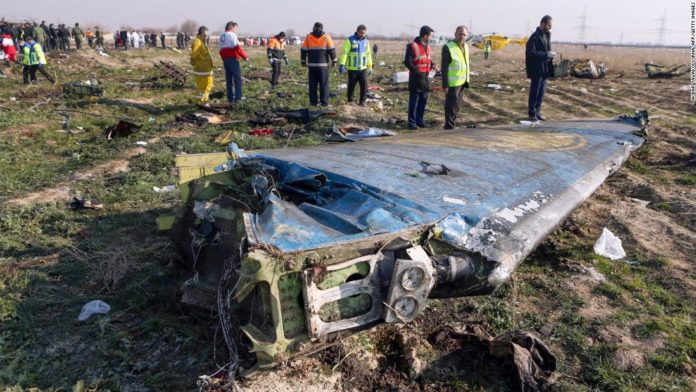 All 176 people on board the flight were killed after it was brought down over the Iranian capital Tehran, hours after Iran had fired missiles at Iraqi bases housing US troops in retaliation for the killing of Iranian General Qassem Soleimani.
The video, published by the New York Times, appears to show the two missiles striking more than 20 seconds apart.
Iranian authorities have previously admitted that Iran’s military shot down the plane. On January 11, Brigadier-General Amir-Ali Hajizadeh, Commander of Iran’s Islamic Revolutionary Guard Corps Aerospace Force said the plane was shot down by a short-range missile and was misidentified as a cruise missile by an air defense operator.
Iran has not previously indicated that the plane was struck twice. Iranian President Hassan Rouhani tweeted on Saturday a reference to multiple “missiles” but did not give any clarification.
“Armed Forces’ internal investigation has concluded that regrettably missiles fired due to human error caused the horrific crash of the Ukrainian plane & death of 176 innocent people,” Rouhani wrote in English, though he did not confirm how many were fired. “Investigations continue to identify & prosecute this great tragedy & unforgivable mistake.”
Rouhani added that “the Islamic Republic of Iran deeply regrets this disastrous mistake,” and Tehran has vowed to investigate and hold the perpetrators to justice, even as protests have erupted in the capital and other cities calling for Rouhani and others to resign.
Iranian riot police used tear gas to disperse thousands of protesters in Tehran’s Azadi Square Sunday. Protests have also reportedly occurred in other cities around the country, including Shiraz, Esfahan, Hamedan and Orumiyeh.
Video showed some protesters calling for the country’s Supreme Leader Ayatollah Ali Khamenei to step down, a far cry from the solidarity and national unity seen in the days after Soleimani’s killing.
“Death to the dictator,” some chanted in the capital, Tehran, in footage posted on social media. In one video, demonstrators chanted, “Khamenei have shame. Leave the country.”