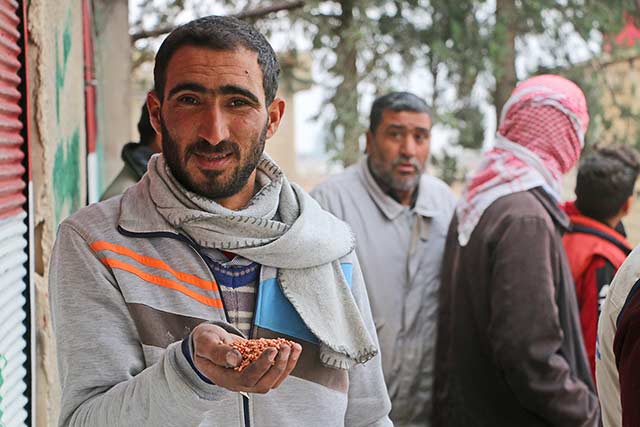 Farming communities in northeast Syria were hit hard due to cumulative impact of eight years of crisis and changing climate. Ongoing military operations have displaced thousands of people daily. But, so have droughts in the past few years as well as wildfires that destroyed hectares of farmland.

The deteriorating security situation at the border region with Turkey in the second half of 2019 has forced rural families to flee their homes for safer communities in Al-Hassakeh and Ar-Raqqa governorates. Following the start of military operations in October 2019, more than 200 000 people have fled. Many abandoned their agricultural lands, staying instead with relatives and extended families in safer zones.

Wildfires that struck the region in May/June 2019, particularly in Al-Hassakeh and Ar-Raqqa governorates, left many farmers without seeds for planting. Wheat production is vital for the country’s food security and nutrition. It plays a key role in stabilizing communities in the northeast.

The wildfires have particularly affected Hussein Haikal, a 36-year-old farmer from Qamishli subdistrict in Al Hassakeh, who owns 15 dunums (1.5 hectares) of land and relies entirely on wheat production as his only source of income. “Life was never easy for me. I support my six children, paraplegic wife and my mother. After the fires burned my entire wheat crop, I was unable to earn an income from my land. I was totally powerless,” said Hussein.

“Last year, I convinced my neighbor to lend me some money so I could buy wheat seed to plant my land and sell the produced grain in the local market,” he remembered. But, Huessein did not expect the unforeseen circumstance. “I never imagined that I would see my crops burning. That was one of my darkest days”.

The Food and Agriculture Organization of the United Nations (FAO) Representative in the Syrian Arab Republic, Mike Robson, emphasized the critical nature of the situation in northeast Syria. “If we do not provide vulnerable farmers with their needs for food production, they will lose their only source of income, and the number of food insecure people will increase,” said Robson.

FAO partnered with the United Nations Office for the Coordination of Humanitarian Affairs (OCHA) to support 9 400 highly vulnerable farmers in Al Hassakeh and Ar-Raqqa governorates with quality agricultural inputs and technical trainings. Each farmer was given 200 kg of seed, sufficient to plant a hectare of land and produce enough grain for two families for their own consumption.

“The FAO-OCHA wheat seed distribution is a result of our appeal to immediately assist displacement-affected farmers with inputs in such hard times. This intervention will contribute to secure them and their extended families with their need of grain for consumption, and improve their income and livelihoods,” added Robson.

Hussein was able to prepare his small land for planting again, thanks to the 200 kg of quality wheat seed and training on good agricultural practices to help him cope with any potential threat. “The quality of seed I received has given me hope and the encouragement to harvest a proper quantity of wheat grain. I want to pay off my debts and support my family with their daily needs,” he stated.

Child labour in agriculture is on the rise again, with further deterioration foreseen due to COVID-19

PETER RABBIT™ teams up with the United Nations, FAO and the UN Foundation on global campaign to mobilize more food heroes

Global food trade is buoyant, as are prices