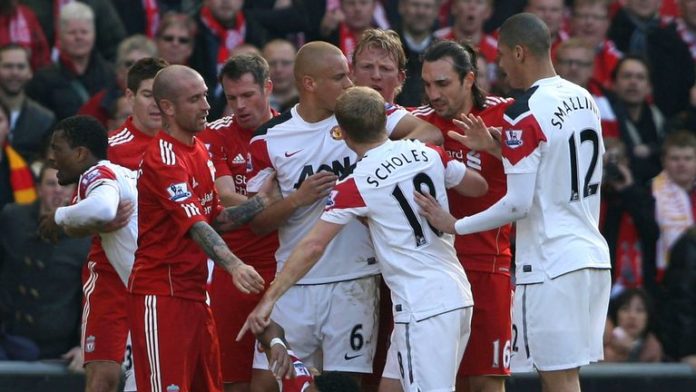 Ahead of Liverpool’s clash with Manchester United on Super Sunday, Dermot Gallagher takes a look at some historical refereeing decisions in the fixture.

Gallagher runs the rule over two potential Jamie Carragher red cards, as well as two strong Liverpool penalty appeals – would VAR have ruled in favour of Liverpool or United in these instances?

Incident: In March 2011, Jamie Carragher goes in high on Nani at the touchline, but is only given a yellow card by referee Phil Dowd. Carragher later revealed he tried to apologise in the United dressing room after the game. Liverpool won 3-1.

Dermot’s view: VAR would have recommended that the point of contact is high, over the top of the ball, and you can change from yellow to red. Nobody would have had any complaints.

Carra on Owen: No red

Incident: Jamie Carragher escapes a red from Andre Marriner for hauling down Michael Owen in 2009, with United complaining Owen was through on goal. Liverpool won the game 2-0.

Dermot’s view: I don’t think Carragher is denying a goalscoring opportunity. VAR would check and say no red card.

Dean Ashton’s view: He is going to go through and shoot! His next touch sets it before a shot!

Incident: In the same game in March 2011, Luis Suarez appears to pull Rafael’s hair after a bust-up involving both teams.

Dermot’s view: Would VAR have given a red? Yes. We have seen a few instances of this happening in the last few years, it’s frowned upon, and it’s a red for violent conduct. VAR would have picked that up relatively easily.

Incident: In March 2015, Steven Gerrard is sent off just 38 seconds after coming on for a stamp on Ander Herrera; Man Utd won the game 2-1 at Anfield.

Dermot’s view: I’m not convinced this was easy to spot. It’s actually an exceptional spot, because it’s after the first tackle that he stamps him. The referee, Martin Atkinson, is so alert. It’s an exceptional bit of detection.

Incident No 1: Gabriel Heinze tackles Fernando Morientes in the penalty area from behind in 2005. No penalty is given by Steve Bennett as United won 1-0 at Anfield.

Dermot’s view: It’s a definite foul, and VAR would have picked that up. Maybe the referee’s angle makes it seem that Heinze has won the ball, but he hasn’t. I don’t think he would have been sent off, but VAR would have recommended a penalty.

Incident No 2: Phil Neville handles inside the penalty area from a cross in the same game, but Bennett said no penalty.

Dermot’s view: There’s no doubt, this is a penalty. His arms are above his head. His arm is clearly up, it strikes it, and the VAR would recommend a penalty.