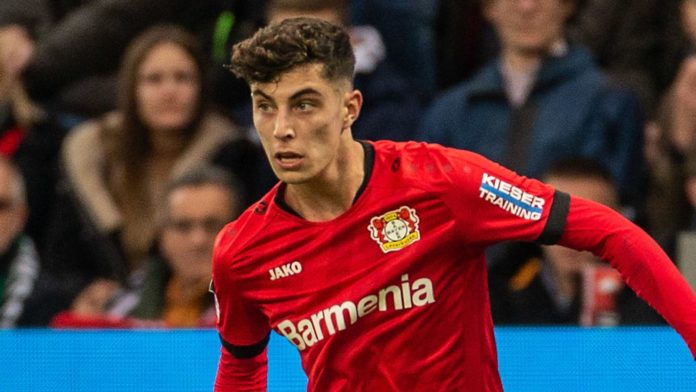 “Havertz is perhaps the heir apparent of Mesut Ozil as far as creative talent is concerned,” says Honigstein on latest episode of Transfer Talk

Kai Havertz, Jadon Sancho and Timo Werner are three of the hottest prospects in Europe and could all be on the move this summer. Here German football expert Raphael Honigstein tells the Transfer Talk podcast where they could be headed and what to expect…

Bayer Leverkusen midfielder Kai Havertz, who has seven caps for Germany, predominantly plays through the middle as a No 10 or second striker, but can also be used out wide.

Last season, the 20-year-old scored 20 goals and registered seven assists for Leverkusen but has struggled for form in front of goal this term, with just three goals and one assist.

Havertz’s dip in form could partly be down to his age, being played in a more removed role by coach Peter Bosz this year and the departure of Julian Brandt to Borussia Dortmund in the summer, says Honigstein.

“Kai Havertz is in high demand because he is widely seen as the next big thing in German football,” said Honigstein, speaking on the latest episode of the Transfer Talk podcast.

“There’s nothing to suggest that any of the attention that has been with him for the last year or so is going to go away because the fundamentals are all still there.

“I think the stats kind of hide some of the other good stuff that he does that might not come out in tangible results as far as goals and assists are concerned this season.

“He still does a tremendous amount of passing in the build-up plus his movement and his link up play, all of these things haven’t gone away.”

The inconsistencies this season should not be an issue when it comes to a summer transfer, according to Honigstein, who says Havertz is “perhaps the heir apparent of Mesut Ozil”.

“Yes I think he will move this summer,” added Honigstein. “The summer move is more of just a given, he perhaps would have been happy moving last summer.

“There was interest there but Leverkusen made it very clear he wouldn’t be allowed to leave and I think he ultimately thought it wouldn’t be the worst thing to spend one more year there.

“Leverkusen know that this is a situation that won’t be able to continue – he has basically outgrown this team already and he will certainly move in the summer.

“The valuation will not be significantly lower than it was last summer, which was well north of €100m, maybe even £100m, that sort of price range. I think Leverkusen will get the money solely because so many clubs want him.”

In the Premier League, Manchester United and Chelsea are reported to be monitoring Havertz, who has also attracted interest domestically in Germany from champions Bayern Munich.

“It’s not easy to call where he will go because of the sheer number of clubs that are interested in him and in need of that kind of player,” says Honigstein.

“Bayern have made no secret of their admiration of the player. Bayern are privately adamant that they can [get Havertz and Leroy Sane], which would be a significant outlay, and I think he would be one of the key targets for them.

“There is huge interest in Spain where I think his game would really be appreciated.

“Chelsea and Manchester United, have a very good authority and have been tracking him very closely. Why wouldn’t you? This is a guy who in a few years will be the outstanding Germany player. If you can get him now, you would try your best to do it. But the competition will not make it easy for any of the clubs.”

Jadon Sancho has spent the last three seasons with Borussia Dortmund in the Bundesliga since leaving Manchester City in 2017.

The 19-year-old can play on either wing, but spends most of his playing time on the right-hand side.

It has been a dramatic rise for Sancho, who has scored 28 goals and registered 36 assists in all competitions for Dortmund since making his debut in October 2017 aged 17.

Sancho’s form has earned him a call-up from England, where he has cemented himself as a regular squad member ahead of this summer’s European Championships.

Dortmund are resigned to losing their prized asset at the end of the season, says Honigstein, but are hoping to get more than the projected £135m they received from Barcelona for the sale of Ousmane Dembele back in 2017.

“I expect it to be Sancho’s last season with Dortmund,” said Honigstein. “The situation is quite similar to the one of Havertz. He’s become so good that there is no real scenario of him staying beyond summer.

“Dortmund know they’ve made it part of the business plan to buy these players and then give them a big improvement, providing that step stone for them and then selling them for huge profit. Sancho is very much in that bracket.

“They would perhaps like to wait until after the Euros where he may well be the key player for England which would see his transfer fee rise to stratospheric levels.

“Even if they can’t prolong this period that long, there will be so much interest that they won’t have any problem making him their record sale.

“If you were to see him every week, you wouldn’t have any problem believing that he is worth the money because he is just getting better and better every single game.”

Chelsea, Manchester City, Manchester United, Paris Saint-Germain, Real Madrid and Barcelona have all made initial enquiries for Sancho, according to Sky in Germany.

Sancho is likely to have his pick of the bunch when his time comes to leave Dortmund and “shouldn’t be too worried about his prospects” because “he is going to end up at a really super club”, says Honigstein.

Asked about where Sancho could end up, Honigstein said: “I think the limit is in terms of the quality of the club that would actually be interesting to him.

“He has reached a position I think, as a prospect, where only the handful of best clubs in the world would be attractive to him rather than the other way around.

“The money and the transfer fee they are a function of his development and it’s because he’s become so good that it will naturally limit the clubs which can be in the conversation as far as his preferred destination is concerned.

RB Leipzig striker Timo Werner, who has 11 goals in 29 caps for Germany, features most through the middle but can also play anywhere across the front three.

Werner’s form in front of goal this season in the Bundesliga – 18 goals in 17 appearances, second only to Robert Lewandowski with 19 – has taken Leipzig to the top of the German league.

Leipzig’s title push rules out a move in January, but Werner has a “gentleman’s agreement” with the club which could allow him to leave in the summer “if the right offer comes along”, says Honigstein.

Bayern Munich have been continuously linked with the striker and Sky in Germany are reporting Real Madrid are very interested in bringing Werner to Spain.

“In the summer possibly [he could move on], he will not move in January,” said Honigstein of Werner, who extended his contract with Leipzig until 2023 last summer.

“There has been conflicting reports about a release clause being active. It is my understanding there is no such contractual ability for him to leave.

“As far as his destination is concerned, he was very close to moving to Bayern in the summer. He was disappointed when Bayern didn’t follow through or make any attempt to extricate him from Leipzig.

“I think it was their aim to get him free from any transfer fee in the summer of 2021. But that didn’t come to pass, they gave him a new deal.

“Because there is a need for that kind of player, I think there will be a bidding war. It’s my understanding that the people who look after him will probably make a decision in the next few months as the interest hots up and more options become available to him.”