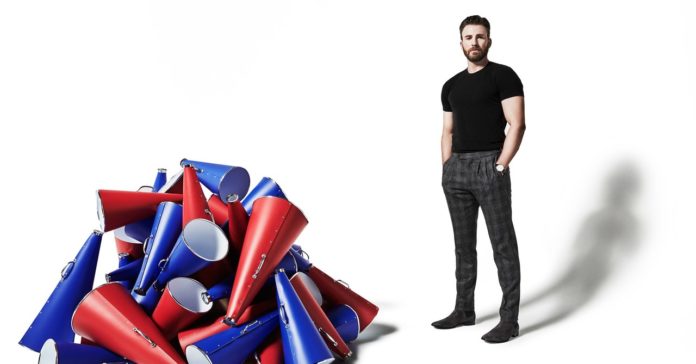 It took a special serum and a flash broil in a Vita-Ray chamber to transform Steve Rogers, a sickly kid from Brooklyn, into Captain America. For Chris Evans, savior of American democracy, the origin story is rather less Marvelous.

One day a few years ago, around the time he was filming Avengers: Infinity War, Evans was watching the news. The on-air discussion turned to an unfamiliar acronym—it might have been NAFTA, he says, but he thinks it was DACA, or Deferred Action for Childhood Arrivals, an Obama-era immigration policy that granted amnesty to people who had been brought into the United States illegally as children. The Trump administration had just announced plans to phase out DACA, leaving more than half a million young immigrants in the lurch. (The Supreme Court will likely rule this year on whether terminating the program was lawful.)

On the other side of the television, Evans squinted. Wait a minute, he thought. What did that acronym stand for again? And was it a good thing or a bad thing? “It was just something I didn’t understand,” he says.

Evans considers himself a politico. Now 38, he grew up in a civic-minded family, the kind that revels in shouting about the news over dinner. His uncle Michael Capuano served 10 terms in Congress as a Democrat from Massachusetts, beginning right around the time Evans graduated from high school and moved to New York to pursue acting. During the 2016 presidential election, Evans campaigned for Hillary Clinton. In 2017 he became an outspoken critic of Trump—even after he was advised to zip it, for risk of alienating moviegoers. Evans could be a truck driver, Capuano says, and he’d still be involved in politics.

But watching TV that day, Evans was totally lost. He Googled the acronym and tripped over all the warring headlines. Then he tried Wikipedia, but, well, the entry was thousands of words long. “It’s this never-ending thing, and you’re just like, who is going to read 12 pages on something?” Evans says. “I just wanted a basic understanding, a basic history, and a basic grasp on what the two parties think.” He decided to build the resource he wanted for himself.

Evans brought the idea to his close friend Mark Kassen, an actor and director he’d met working on the 2011 indie film Puncture. Kassen signed on and recruited a third partner, Joe Kiani, the founder and CEO of a medical technology company called Masimo. The three met for lobster rolls in Boston. What the country needed, they decided, was a kind of Schoolhouse Rock for adults—a simple, memorable way to learn the ins and outs of civic life. Evans suggested working with politicians directly. Kiani, who had made some friends on Capitol Hill over the years, thought they’d go for it. Each partner agreed to put up money to get the thing off the ground. (They wouldn’t say how much.) They spent some time Googling similar outlets and figuring out where they fit in, Kassen says.

They began by establishing a few rules. First, A Starting Point would give politicians free rein to answer questions as they pleased—no editing, no moderation, no interjections. Second, they would hire fact-checkers to make sure they weren’t promoting misinformation. Third, they would design a site that privileged diversity of opinion, where you could watch a dozen different people answering the same question in different ways. Here, though, imbibing the information would feel more like watching YouTube than skimming Wikipedia—more like entertainment than homework.

The trio mocked up a list of questions to bring to Capitol Hill, starting with the ones that most baffled them. (Is the electoral college still necessary?) They talked, admiringly, about the way presidential debate moderators manage to make their language sound neutral. (Should the questions refer to a “climate crisis” or a “climate situation,” “illegal immigrants” or “undocumented immigrants”?) Then Evans recorded a video on his couch in LA. “Hi, I’m Chris Evans,” he began. “If you’re watching this, I hope you’ll consider contributing to my new civics engagement project called A Starting Point.” He emailed the file to every senator and representative in Congress.