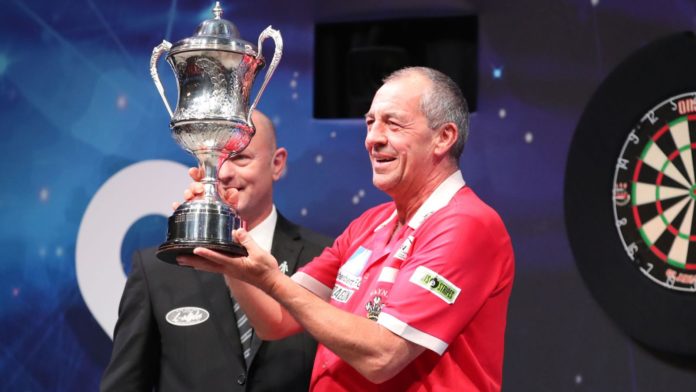 BDO world champion Wayne Warren will pick up £23,000 for his title success after dramatic cuts to the tournament’s prize fund came to light.

The 57-year-old won a thrilling all-Welsh final with Jim Williams on Sunday to crown a memorable week in his career, but for months fears have grown about prize money and the organisation’s future.

Before the tournament had even begun, BDO chairman Des Jacklin had revealed in a letter to players poor ticket sales at the Indigo and no title sponsor would mean a cut in prize money and, with no figures revealed, criticism followed from current and former players.

Former women’s world champion Anastasia Dobromyslova and former PDC World Championship finalist Andy Hamilton were among the names to speak out during the tournament.

“There’s a lot of players who are hardly speaking or too shy or concerned about their future. All players have to stick together,” Hamilton said in a scathing interview with Live Darts.

“At this time I don’t even know what I’m going to get at the moment, or if I’m going to get anything.”@TheHammer180 opens up on the uncertainty he and his fellow BDO players are facing over prize money and their future ??️

“He needs to stand up and come out and tell us all what’s happening or just disappear.

“The way the BDO is going at the moment, it’s going to fail. But for grassroots darts it can’t fail. Without grassroots where can people start their career from?”

Last year, Glen Durrant picked up £100,000 to go with the prestigious trophy when he claimed his third BDO title but, after 12 months of controversy, a leaked email suggested the prize pot’s significantly reduced figures.

Alongside the champion’s prize and a £10,000 runners-up cheque, those beaten in the preliminary round are in line to pick up £1,500, while beaten first-rounders will collect £2,000 and the beaten semi-finalists £5,000 in prize money.

Prior to the tournament a GoFundMe page had been set up to support the women’s tournament with fears prize money could be minimal and while not the record £20,000 that Jacklin had declared last year, the £10,000 for Mikuru Suzuki is £2,000 down on what she won last year, while first-round losers pick up just £500.

In fact the men’s winner’s cheque is the lowest since Scotland’s Jocky Wilson was handed £20,000 for his victory over Eric Bristow in 1989, and is some £477,000 less than Peter Wright’s winning sum for claiming the Sid Waddell Trophy at Alexandra Palace.

BDO runner-up Williams, beaten 7-4 by Warren, was among the first to react with a post on Facebook on Wednesday morning in response to suggestions that the runner-up would receive £10k prize money that read “Sick. £2k tax, £3k to eat, sleep and buy tickets = £5k for coming runner up in the world championship.”

The BDO has endured a troubled 12 months that has included a farcical World Masters draw, a switch from the popular Lakeside Country Club and increasing doubts about its future and whether it is fit for purpose following intervention from the Word Darts Federation.

In early December the WDF announced it would stop recognising BDO events, citing a breach of rules at the World Masters and downgrading the BDO to ‘associate member’ status.

On Monday the WDF followed that up with a revised ranking system and proposed gold, silver and bronze tiering system for tournaments as part of its ‘2020 vision’ and it remains to be seen where the BDO calendar fits into that.

As of Tuesday it is understood the players had yet to be paid their tournament prize money from the BDO and the majority of the field are due to head to PDC Q-School in Wigan.

Twenty two-year Tour cards are up for grabs in the UK and a further 11 in Germany at European Q-School and, with doubts about the future of the BDO and the professional riches on offer on the PDC circuit, they have seen numbers swell to 521 from just under 400 last year.