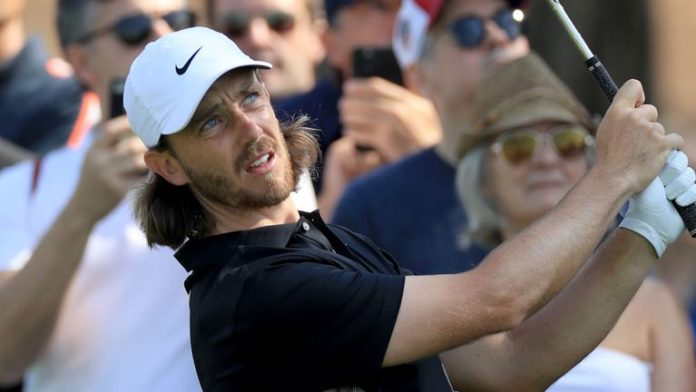 Tommy Fleetwood is struggling to find space in the busy summer schedule to take time off as he looks to reclaim the Abu Dhabi HSBC Championship title this week.

Fleetwood is looking forward to playing plenty of events in the lead up to the Olympics, FedExCup Play-Offs and Ryder Cup, but he also wants to spend more time developing his game away from tournament conditions while also enjoying more breaks with his young family.

But he concedes it will be tough to take time away from competitive golf during an Olympic and Ryder Cup year, and he hinted that he would not miss events if it looked like damaging his chances of contending for a second Race to Dubai crown.

“I would like to cut a couple of events, but I would like to play as many as possible when it’s the Olympics, Ryder Cup, the FedExCup, get all the way through that and the Race to Dubai,” he said. “You want to play every event possible in that respect.

“I just feel like I’ve had two or three years where I’ve played a lot. I’ve been playing both tours, and I’ve done really well. But I would love more of a chance to have a bit of time off, a bit more time with the family or a bit more time developing my game instead of actually preparing for a tournament.

“So that is something that I’m looking to do moving forward, including this year, and I just think the summer period can get very, very busy, but I would love it to be that way.

“The Race to Dubai is always going to be something that we strive for. I think playing both sides, PGA and European Tour, you know straightaway that the only way you can win The Race to Dubai is by competing in the biggest events and doing well in those events.

“So that’s what I’ve got to do. I’d love to come into that last event with a chance of winning it all, I think is very special. It’s something that I’ve been very grateful for and I’ve loved every minute of it when it gets to the last event. So fingers crossed, work hard, play well and do it again.”

Fleetwood enjoyed two stellar seasons after winning back-to-back Abu Dhabi titles, while Shane Lowry lifted the silverware last year and went on to have the best year of his career, highlighted by his memorable Open victory at Royal Portrush.

“A win in January helps momentum,” he added. “I had been in a slump for most of 2015 and 2016 but I felt like by the end of 2016, I was playing really well. Then, 2017, I felt ready to have a really good year and win a tournament again, and it just so happened again it was this one. I was back where I wanted to be and that gave me a lot of confidence.

“When you’ve had a break, and you always come into this week with a little bit of an unknown. But I know people have played already like a week before, which is actually a really good idea.

“But I think when you’ve had that break, no matter how much practice you’ve done, you haven’t played a tournament, and you don’t know how it’s going to go, and if it goes well, then I think it’s just clarity. It’s clarity in people’s minds, and I think it’s just a step forward, a big one.

“So winning, there’s not really a better way to start the year than winning, so I think that’s a big part of it.”