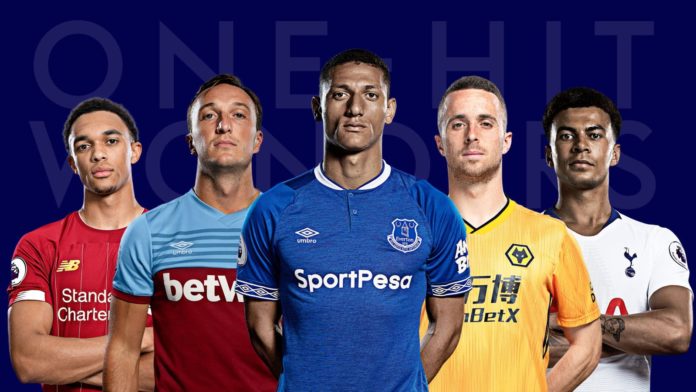 Billy Lumsden takes a look at each of the Premier League clubs to see which player has scored the highest on a particular game-day, for their side, in Fantasy Football.

Check out these players that have produced some scintillating performances in 2019/20:

Christian Pulisic opened his Premier League account with Chelsea against Burnley, and in some style. He took his goals in superb style as he scored a hat-trick at Turf Moor, leaving little surprise as to who won the man-of-the-match award.

It was Richarlison’s first and only double of the season, but a crucial one nevertheless as it won Everton all three points against Wolves. Richarlison has only reached tier-two tackle bonus points on this occasion, whereas he has met the tier-one threshold an impressive seven times, only bettered by Ricardo Pereira of Leicester.

Rather unsurprisingly, Ben Chilwell’s points tally came in Leicester’s 9-0 demolition of Southampton at St Mary’s. He contributed to a third of those goals on the night through his one strike and two assists, while keeping it tight at the back to earn an extra five points. Chilwell comes in at £8m, while Ayoze Perez, who also scored 23, is priced at £9.2m, meaning he just missed out on being Leicester’s highest individual scorer this season.

Trent Alexander-Arnold tore Leicester apart with two assists and a fine finish past Kasper Schmeichel. On top of this, he kept a clean sheet and picked up the man-of-the-match award – Alexander-Arnold is on 140 points this term and is the second highest-scoring defender in Fantasy Football.

How fitting that Sergio Aguero would swoop in and rack up the most points from a single game for Manchester City. The go-to man over the years moved onto 12 Premier League hat-tricks after he claimed another in City’s 6-1 drubbing of Aston Villa, edging past Alan Shearer’s previous record.

Marcus Rashford was competing with himself to be the highest Manchester United scorer from an individual game-day, posting 18 points on two occasions against Tottenham and Norwich. Between these fixtures, he has scored seven goals in eight games, placing him on 14 for 2019/20.

It was after his hat-trick against Newcastle that people started to consider Teemu Pukki as a real goalscorer, transitioning from the Sky Bet Championship to the Premier League. He earned the man-of-the-match award and has kicked on since; he is just one goal away from hitting double figures in his debut season.

Dele Alli scored twice against Bournemouth to give Tottenham all three points in their 3-2 victory, enough to land the man-of-the-match award for the second time this season. He steals in ahead of Heung-Min Son, who recorded 18 against Crystal Palace.

It was a blistering start to 2020 for Mark Noble as he scored two of West Ham’s four goals against Bournemouth, one from open play and one from the penalty spot. His two shots on target, combined with the man-of-the-match award, allowed the central midfielder to pick up five more points. Noble ended the match on 19, accruing 28.8 per cent of his overall seasonal points for the season.

Two of Diogo Jota’s three goals this season came at The Amex against Brighton. It is only the second time this season Jota has recorded a double-figure haul (10 against Crystal Palace), while he has not registered more than four points in any of his remaining Premier League matches.

Pierre-Emerick Aubameyang? No. Alexandre Lacazette? No. Perhaps £72m Nicolas Pepe? No. It is Sokratis Papastathopoulos who boasts the highest total from an individual game for Arsenal this season in Sky Sports Fantasy Football. This came from a rare clean sheet against Manchester United, his third of the season at the time, which was after he had volleyed home from short range to double Arsenal’s lead. His performance saw him crowned man of the match in Arsenal’s first win under new boss Mikel Arteta.

Maybe it is not so surprising considering Danny Ings has hit the net 14 times this season. He reached double figures for the term with his double at Aston Villa earlier on in the campaign. He was awarded man of the match for his part in Southampton’s win, and the frontman continues to be in the hunt for the Premier League Golden Boot, with his goal tally only bettered by Jamie Vardy.